What a great week it has been! 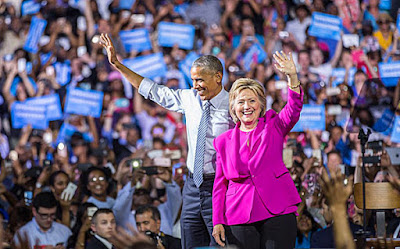 Boy oh boy, what a firestorm in the blogosphere!  The decision of the FBI not to recommend charges be brought against Hillary Clinton has every red-baiting pundit rushing to his computer to unleash an angry torrent of abuse.  The predominant theme is that she is above the law, set up in part by Bill's impromptu meeting with Loretta Lynch a few days ago.  Yet, here she was subject to the same scrutiny anyone would have gotten if there was reason to suspect national security had been breached.

The FBI recovered her deleted e-mails, went through them with a fine tooth comb and found nothing to suggest she had breached national security.  The FBI director found her "extremely careless" for relaying some "classified information" through an "unclassified e-mail system," but otherwise saw no reason to prosecute her.

This has been a rough week for Republicans who had hoped to bring Clinton down before the convention.  Now, they literally have nothing.  She has been cleared of all misdeeds regarding Benghazi, once again, and now cleared of having mishandled classified information while serving as Secretary of State.  Of course, this doesn't stop Republicans from venting their indignation, and who knows maybe we will see a separate House investigation now that Trey Gowdy has nothing to do, but it is doubtful the GOP will go down this road again only to have more mud thrown in its face.

We all knew these were politically-generated "scandals," launched as pre-emptive strikes against Hillary with the hope she wouldn't run for President.  The e-mail scandal broke in March, 2015, well before she declared her candidacy, and for a moment took the focus off the ongoing House investigation into her role in Benghazi.  We can thank the NYTimes for that, which had come across a few hacked e-mails that suggested Hillary was corresponding with past and current state officials via her private e-mail account, which is considered a potential breach of national security.  Republicans jumped all over this, as did Hillary detractors in general, prompting the FBI to launch an investigation into the matter.

It didn't help that she deleted so much private e-mail after she stepped down as Secretary of State.  It made it look like she was covering something up.  Conspiracy theories quickly arose, but the FBI was able to recover most of these e-mails and found nothing a "reasonable prosecutor" could bring against her.  Sadly, we all know Republican leaders aren't being very reasonable these days so there will be a follow-up of some kind, probably less public than the House Select Committee on Benghazi that turned out to be a monumental waste of time of energy.

The Donald has vowed to indict Hillary if elected to office, but mercifully we will be spared this, as his chances of becoming President grow dimmer by the hour.  In his rambling rally in North Carolina, on the heels of Hillary in the same state, he let slip how Saddam Hussein knew how to handle terrorists.  This gave further proof, if anymore proof was needed, that Trump's knowledge of foreign affairs is no better than the rednecks he appeals to.

Barack Obama went into full campaign mode praising Hillary for her steady hand, saying this is what we need in a time of uncertainty, not some highly temperamental political gadfly, who doesn't even bother to fact check anything before spewing it out on twitter or political rallies.

It really couldn't be any worse for Republicans heading into their national convention.  They have saddled themselves to perhaps the worst nominee they ever put forward as President with the very real likelihood of not only losing the White House again but Congress as well.  At that point, they will have no way to stop the Democrats from confirming a new Supreme Court justice that will throw the balance of power completely to the Democratic side.  The ultimate coup de grace for the GOP.

Of course, there is still plenty of time between now and November, but "steady and true" Hillary has proven she can withstand all the "slings and arrows" thrown at her and come out smiling, albeit a bit too smugly.  Princess Merida she is not, but she has clearly shown she has the mettle to be President.