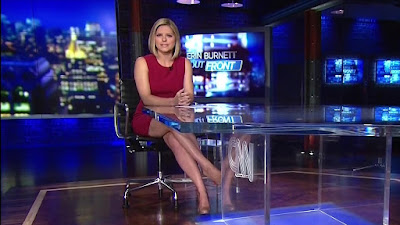 It is nice having a range of cable news programs again.  For the last few years the only one we got from our analog cable subscriber was CNN, but with the new digital cable subscriber we get BBC, Euronews, and other premium channels if we so choose.  You realize how badly CNN has slipped behind other news networks, seeming to have adopted the Fox model of generating faux arguments with their round table discussions.  Kate Bolduan has emerged as their answer to Megyn Kelly, replete with plexiglass tables so you can see her legs better.  Chris Cuomo has become their "Hannity," stirring up unnecessary arguments mostly to hear himself talk, albeit to the left of the political spectrum.  Wolf Blitzer lords over the station like Baba O'Reilly, although he tries hard to keep his political views right down the middle.

I suppose the success of Kate Bolduan can be measured by SNL now lampooning At This Hour, and also the fan base she now has thanks to her sexy legs.  She also anchors a political round table with four panelists who chew over the latest juicy story on the campaign trail.  There is one Trumpkin, usually Kayleigh McEnany, a Hillarycrat, and two presumably neutral participants, one who leans left and the other right.  It's the kind of "balance" we have come to expect from CNN.  While it is hard to find sane Trump supporters, I would think CNN could do better than Kayleigh, who proudly personifies the "dumb blonde."

CNN also offers a number of other political commentary programs headed by senior analysts like Wolf Blitzer, the so-called "Political (Jonathan) Mann," and of course John King, who has never met a touch screen he didn't like.  Wolf is the "old man" of the group and a favorite target of comedians.  His name alone makes you laugh, but apparently it is his birth name.  It feels like he has been at CNN from the beginning, but joined the cast in 1990 after a lengthy stint with American Israel Public Affairs Committee, otherwise known as AIPAC.  Wolf was there to cover the breakdown of the Soviet Union in 1991 and virtually every major news story since.  Here's his lengthy CNN bio.

King and Mann are battling to assume the lead role whenever Wolf should retire.  None of them have ever offered any insightful political commentary.  These are guys who play it purely by the numbers.  If you want more pithy insights, CNN gives us Christiane Amanpour, who is not afraid to tangle with her guests, much like BBC's Hardtalk.  She earned her chops as a war correspondent, probably the only real journalist left at CNN.

Like its principal rival Fox News, CNN has shifted to offering opinion, not news.  The programs are almost all built around political commentary of one sort or another, with news relegated to breaking events, which the commentators in turn dwell on the rest of the day.  They do offer various insights into Asia and Africa to satisfy its broad market and continue to give us business news in the form of Quest Means Business, a dandy with an insufferable British accent.  The old guy who once anchored the CNN business desk now works at Fox.

Very little of what is said on CNN has any bearing on the outcome of the news.  As Dorothy Parker might say, their commentaries run the gamut of insight from A to B.  One of the hosts will have some Trumpkin on the ropes and then the Trumpkin will say what about Hillary, and the questions quickly turn to her, rather than finish off the Trumpkin.  It's not like you can't go after a Hillarycrat later.  This lack of focus is what drags CNN down, and why I can only stand to watch it in small eye drop measures.  Tim Sebastian, the former host of Hardtalk, would never let a guest off the hook like that.

It's not like BBC hasn't suffered over the years as well, but nowhere to the extent of CNN, which was once a reputable cable news channel.  I've long thought that 911 is what sucked the wind out of this organization.  The Time Warner merger didn't help either.  CNN "news" became commodified and lost whatever bite it had.  You still find some bite in Amanpour and Anderson Cooper, but for the most part CNN has become a very unappealing Swedish banquet.

CNN, like the other major American news broadcast companies, allowed itself to be manipulated during the Afghanistan and Iraq wars, choosing to be "embedded" with the troops rather than follow what was really going on in these two countries.  Rather than question Bush's insistence on WMD's in Iraq, they let the administration's spokespersons say what they would about Hussein's ever shifting stockpile, until they even had to admit it didn't exist.  When Abu Graib hit the fan, we were told countless stories of the bravery of our young men and women in Iraq to counteract the atrocities that were posted from this Iraqi prison.  Time and time again, CNN not only missed the mark, but the entire target.   In order to keep Christiane Amanpour, CNN pretty much gave her free reign, as she seemed to be one of the few journalists they had left who questioned what was happening at the time.  The others had either been silenced or dropped.

The situation hasn't gotten any better since our withdrawal from Iraq.  CNN poorly covers the election, focusing way too much on meaningless polls and allowing Trump's surrogates to dominate their political discussions.  They replaced Roger Stone with Corey Lewandowski but the message is still the same.  It's only been since the Republican Convention that CNN has made any effort to seriously question Trump's motives.  Even still, they pretty much let Lewandowski get away with saying anything in support of Trump.  Who needs Fox News?

Maybe Kate Bolduan will come into her own, but the problem lies with management, which seems to think Americans prefer this kind of soft-pedaled news served up in bite-size pieces with leggy newscasters as appealing hostesses.  Let the Internet deal with hard news.  Those who are that interested in what is going on aren't going to watch television anyway.  CNN has become your go-to channel when sitting in the airport lobby waiting for your departure.  News on the Go, they should call it, as it stays warm about as long as your coffee does in its paper Starbucks cup.