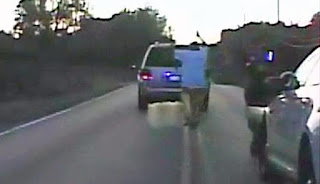 A not-so-funny thing happened while all those pundits and politicians were venting their rage on Colin Kaepernick in the wake of the New York-New Jersey bombings, two unarmed black men were gunned down in Tulsa and Charlotte by police officers.  The movement to sit, kneel or raise a fist during the national anthem has grown during the football season, not just at the professional level but at the college and high school level as well.  As a result, "patriots" like Steve King blamed Colin directly for the NY/NJ bombings.

It's the kind of mind-numbing stupidity that led many whites to turn their backs as police chiefs like Bull Connor turned dogs and fire hoses on black protesters in Birmingham, which is not lost on the black community.  Donald Trump addressed the issue at a rally in Philadelphia but his words fell flat when he foisted the blame on Obama and Clinton for creating this climate of unrest.

We are getting a replay of the late 1960s and early 70s when Nixon tried to impose law and order on the nation, rather than deal with the institutional racism that pervades our society.  In this way, Trump is right, nothing much has changed, but rather than address the issue in any meaningful way, he just wants more law and order.  Worse, he appeals to the same type of people who rejected the Civil Rights movement, and violently attacked Martin Luther King's first march from Selma to Montgomery.

Police forces today are heavily armed, looking more like SWAT teams with their riot gear, assault rifles and armored trucks.  You would think they were taking Aleppo, not trying to bring calm to American city streets.  You can thank the 1033 program Congress passed in 1996, which allowed the transfer of excess military equipment to civilian law enforcement agencies.  It doesn't seem like much training went along with the equipment.

I heard a representative of a Florida police department on BBC trying to explain these standoffs.  An officer is trained to get a suspect to comply with his or her orders, so when a suspect doesn't directly comply with those orders, some officers panic.  That appears to be the case in Tulsa, but it doesn't explain the widespread occurrences of these incidents throughout this country.

Our police officers are being trained to combat urban warfare, literally, rather than deal with unruly suspects and protests in a calm and reassuring manner.  This goes back to before 911, so you can't blame the rise of al Qaeda and ISIS on this.  You can't blame an increase in crime rate either, since that has dropped consistently in the years since the 1970s.  Yet, many police forces across this country seem to live in fear of their communities and have resorted to very dangerous means to impose order on the streets.

None of this makes any sense, as Police Chief Rodney Muterspaw pointed out, urging police in a tweet to STOP. #TerenceCrutcher!