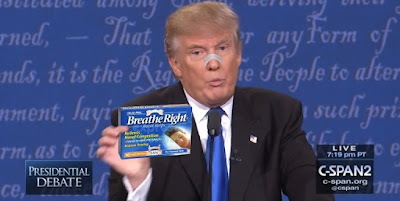 There are so many ways one could go with last night's debate that it is hard to choose.  Probably the worst thing to come out of it is that Trump has a new nickname, Snifflin' Donald, as he seemed to be battling a cold or as Howard Dean tweeted, "Notice Trump sniffing all the time.  Coke user?"  Maybe the mic had been turned up to magnify his sniffles as they became the biggest takeaway from the evening.

The Donald appeared despondent afterward, claiming his mic was defective, but viewers had very little trouble hearing him.  I guess Donald didn't like the way he sounded -- loud, harsh, off balance and often incoherent.   What little traction he found early, when he attacked Hillary on her husband signing NAFTA into law, was lost when it came to his tax returns and how to address institutional racism.  He never regained his composure, even appearing to be sulking as Hillary continued to attack him on his taxes and shady business dealings.

Hillary was calm, cool and collected throughout the night, sneaking in her jabs time and again.  It looked like Donald's head would explode.  He really appeared uncomfortable on stage, as if all this questioning was a waste of his valuable time.  He glossed over every major issue that was presented except when it came to his rehearsed attempt to deal with the birther question, falsely trying to pin the birther movement on Sidney Blumenthal and Patti Solis Doyle, both friends of Hillary.  Of course, when the birther issue has been the centerpiece of your political awakening it is pretty hard to let it go.

His performance was so bad that even Fox criticized him for not exploiting Clinton's e-mails and other faux scandals the news network had magnified during the course of the campaign.  At one point he even offered a bargain that he would release his tax returns when Hillary released her e-mails.  Hillary showed no mercy, tossing out various speculations as to why Trump hasn't released his returns including the possibility that he paid no income tax at all.  All Trump could muster in his defense, "that makes me smart."

Even though Hillary landed a lot of stinging jabs, she failed to deliver the knock-out punch.  Trump will live to see another debate.  Maybe he will prepare himself better for the next one, as I doubt Anderson Cooper will be as accommodating as Lester Holt.  More importantly, Donald needs to find better antihistamines or perhaps nasal strips to combat those nasty sniffles, or lay off the coke.

Posted by James Ferguson at 2:59 PM