The media gives Donald a clean bill of health 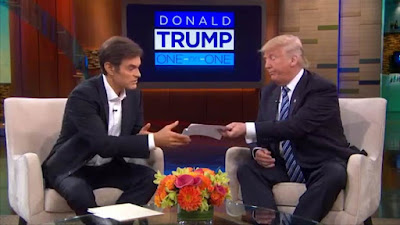 When the going gets weird, the weird get weirder.  It really is a shame the good doctor isn't around to cover this campaign.  Hunter Thompson would have had a field day with this election cycle.  I don't even think he could have imagined Trump going on Dr. Oz to discuss a one-page summary of his physical examination.  It was such a momentous occasion that CNN and Fox were compelled to provide breaking news reports of the Trump campaign delivering this highly classified paper to the Oz studios, as apparently Trump was of two minds on whether to divulge this personal information or not.

Perhaps the only person more shameless than Trump is Dr. Oz, who has made a fortune off hypochondriacs and obese persons who will take advice from virtually any charlatan.  I can well imagine John Oliver's response to this utterly shameless act of self-promotion, as he is no friend of either Trump or Oz.  Of course, Donald presented himself as the very picture of good health and Dr. Oz seemed to agree, complimenting Trump on his transparency.

All this comes on the heels of the latest speculation surrounding Hillary's mysterious illness.  The Vegas betting line seems to be going with Parkinson's, but Alzheimer's and Multiple Sclerosis have been tossed out too.  The doctor who revealed the high rate of CTE in the NFL thinks she has been poisoned, fitting with the rampant speculation that the Kremlin is undermining the general election.

The great health issue, which emerged full blown this month, was rarely discussed during the primaries.  Unlike all the other scandals and mysteries surrounding Hillary, this one seems to be sticking, largely because her fall at the 911 memorial service in New York took everyone by surprise.  It doesn't matter that her physician was quick to tell the media that Hillary is suffering from pneumonia, that is far too pedestrian an illness for her to have.

Some of you might recall that Thompson liked to speculate on the health of presidential candidates, suggesting that Edmund Muskie might be be pumping himself with ibogaine, a hallucinogenic drug, in an effort to explain why the Democratic candidate looked "tired and confused."  Of course, the good doctor meant this in humor, but the news pundits today are seriously speculating as to what ails Hillary.

As for Donald, he seems to get a free pass despite the fact that he moves around like a "vicious 240-pound water rat," barely able to fit between the column and rail on his tour of the Flint Michigan water treatment plant.  Yet, tells Dr. Oz he only needs to lose 15 pounds.  Looks more like 50, Donald!

There are any number of reasons why he could have such orange skin, like cartotenoderma, which if left untreated could lead to diabetes and liver disease, but nary a word from Dr. Oz.  More likely he is spending too much time on a tanning bed, which would explain his raccoon eyes.  This increases the likelihood of melanoma.  Or, he could just be an over-sized Oompa-Loompa, but who am I to say?  I'm not a doctor.

I'm now expecting him to go on Lou Dobbs Tonight to present a one-page summary of his tax returns for Old Lou to scrutinize before a Fox audience.  No one knows better how to play the press than Donald, who had them fall hook, line and sinker for the release of his medical records.  We have definitely reached rock bottom!

Posted by James Ferguson at 2:16 PM