A kiss is just a kiss 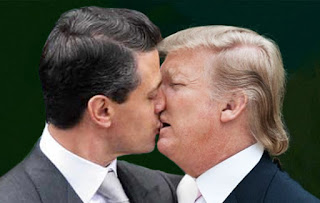 When I heard Trump was headed to Mexico to meet with President Enrique Pena Nieto I let out a loud guffaw.  It was just another one of his political stunts, but hours later there were the two of them holding a joint press conference after a meeting in the Presidential palace.

The invitation was apparently only for appearance sake but Trump took Nieto up on it and the Mexican president was left no choice but to confront the Donald.  It was kind of like when Stephen Colbert had his shot at Trump on the Late Show.  Nieto, like Colbert, found himself eating his own words.  They came out hollow with Trump just standing there, probably not even listening to the translator beside him, because what did it matter, he showed his supporters he could confront the enemy.

Sure, Trump played nice when finally given the opportunity to speak, dressing up his wall in garlands and not saying Mexico would be forced to pay for it.  But, the message was still the same and Mexicans felt shamed.   The mere presence of the man on Mexican soil was an affront to their pride and Nieto just stood there and took it as Trump said what he had to say before flying back to a rally in Arizona to lay out his ten-point plan, literally doubling down on what he has proposed before and vowing "zero tolerance" on illegal immigration. The humiliation was complete.

Hillary now has the opportunity to go down to Mexico to try to mend fences, but it is unlikely to get the same coverage this trip got.  Trump's little trip was plastered all over the news screens and blog walls.  Trump called Nieto's bluff.  It didn't matter the facts Nieto had at his disposal, citing Chamber of Commerce statistics to back up his claim that the trade between the US and Mexico was a positive influence, not a negative influence.  Trump just stood there smugly, ignoring every word that came out of Nieto's mouth, and when his time came rubbed the president's face in the dirt in front of his own people.

Enrique Pena Nieto seems like a bright, well-spoken, young man but it is doubtful he will survive another election.  The only thing positive about this as far as Democrats are concerned is that it took place two months before the election, so it is likely to be long forgotten by November 8.  Trump will have plenty of opportunities to trip over himself between now and then.