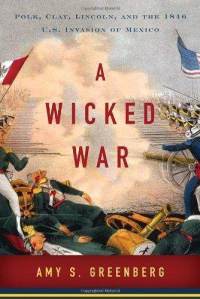 Amy Greenberg offers a fresh take on the Mexican War, approaching it largely from the anti-war sentiments expressed at the time by such statesmen as Henry Clay and Abraham Lincoln.  Most historians have regarded the Mexican War as a manufactured war largely engineered to expand slavery below the Mason-Dixie line.  Theoretically, the line ran all the way to the Pacific Ocean, so annexing Texas, the New Mexico territory and California virtually doubled the size of the "South."

As wars go, it was a relatively easy affair for the US Army, which greatly outmanned the duplicitous Santa Ana, who was largely bent on seizing power of Mexico again.  The sprawling country simply wasn't prepared for the onslaught and succumbed within a year and a half, forced to sign the notorious Treaty of Guadalupe Hildago, which ceded Upper California and the New Mexico territories to the United States, which had previously taken Texas, all for the princely sum of $15 million.  The two countries would forever be divided by the Rio Grande River.

It was U.S. Grant who called it a "Wicked War" in his 1879 Memoirs, but like many young American officers, he honed his skills on the battlefield, which served him well during the Civil War.  He also said he wished he had the "moral courage" to resign, finding the war contemptible on many levels.  As Greenberg illustrates in her narrative, so did many others, but Polk and the Southern Democrats held sway in Congress, buttressed by their friends in the North, leaving Lincoln to make a moot speech at the end of the war in 1848, although it sums up the cost of the war to the national conscience.  Several historians argue that the Mexican War was one of the precipitating factors that led to the creation of the Republican Party in 1854. which Lincoln would lead in 1860.

Historians have also viewed the war as America's first attempt to enforce the Monroe Doctrine, and elevated  Zachary Taylor to hero and eventual President of the United States, although his term would be short lived.  Bernard De Voto wrote a caustic account of the war in Year of Decision 1846 taking aim at all the manufactured heros that arose from the war, notably John Fremont, who was largely responsible for annexing California.  I look forward to reading Greenberg's account of the war. 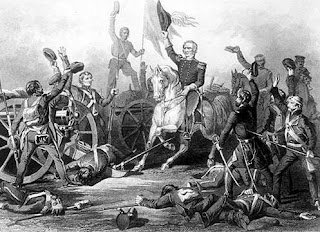 Posted by James Ferguson at 1:53 AM