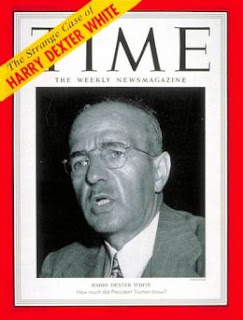 I was bemused to find Anne Applebaum calling out Harry Dexter White as a Soviet spy in her recent book Iron Curtain: The Crushing of Eastern Europe, 1944-1956.  Apparently, she drew her conclusion from Allen Weinstein's and Alexander Vassiliev's The Haunted Wood, from a few years back, which called out a number of top officials in the Roosevelt and Truman administrations, based on the release of the Mitrokhin Archives.  However, many of these allegations have been challenged and refuted, notably that of White, who was fundamental in shaping Roosevelt New Deal policies and the creation of the International Monetary Fund.

James Broughton argues effectively in his paper, The Case Against Harry Dexter White, published in 2000, that these allegations are largely circumstantial, as White was dealing with a number of Soviet officials in his capacity as undersecretary to Morgenthau during the Roosevelt administration.  The Roosevelt administration treated the Soviet Union as an ally during WWII, exchanging information and in hashing out a post-war economy at Bretton Woods.  Although, Broughton concedes that in the end one can read whatever he wants into the "revelations" that were made by Mitrokhin.

White has been the subject of several books in recent years.  One of the major responses to the allegations was Treasonable Doubt by Bruce Craig, published in 2004.  Like Broughton, he defends White saying that the undersecretary's decisions were consistent with the policies being set by Morgenthau.  White was an internationalist and believed strongly in the integration of the Soviet Union in a new global economy, especially with Britain reduced as a result of the war.  Truman regarded White well enough to make him the head of the newly created International Monetary Fund in 1946, a post White held for one year before allegations swirling around about his Soviet sympathies resulted in his resignation.  He died in 1948, shortly after being cleared of any conflicts of interest.

It seems Anne Applebaum was content to take the VENONA decrypts at face value in regard to White.  She tossed out his name loosely, and has yet to circle back to note why she chose to mention him, unlike Walter Duranty, who she felt purposely downplayed the Ukranian famine that was occurring as a result of Stalin's policies.  She insists he was fully aware of it at the time.  Duranty was later exposed as a Soviet agent in the VENONA decrypts.  Broughton and Craig argue that one cannot draw such clear distinctions in regard to Harry Dexter White.