Woodward is at it again 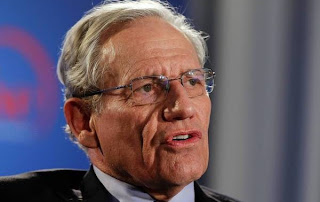 For whatever reason of his own (seemingly a very personal one), Bob Woodward has chosen to lash out at the Obama administration.  Previously, he had portrayed Obama as a novice in The Price of Politics.  Now, he states that the sequester was Obama's idea from the start, essentially supporting Boehner's current argument, as the Republicans find themselves taking most of the flack for the impasse on Capitol Hill.

Woodward claims a "very senior person" threatened him ahead of an op-ed piece he later published, claiming that Obama "moved the goal posts" on the Republicans by calling for more revenue.  This so called "sequester deal-changer" he believes is the reason for the impasse, not all the stonewalling the Republicans have been doing.

Former Obama campaign spokesperson, Lis Smith, said that "Woodward deserves a lot of credit for taking a macro story about DC dysfunction, competing econ theories & making it all about him."