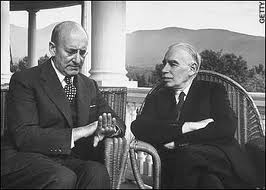 Economic history has always fascinated me and this looks like a good new book, The Battle of Bretton Woods, on the making of the new financial order following WWII.  It was out of Bretton Woods that the IMF, World Bank and World Trade Organization were born, an attempt to bring global financial security to a world that had literally been torn asunder.  The United States was the kingmaker in this regard.  Great Britain found itself for the first time in a subservient role, as the US held two-thirds of the world's gold reserves.

The dollar would become the new world common currency, on which exchange rates were based, creating a new standard which John Maynard Keynes called "the exact opposite of the gold standard."  Keynes wanted to go one step further and create a single global currency, but lost his argument.  It would take nearly 30 years before this system eroded to the point of collapse, with Nixon taking the dollar off the gold standard, as there wasn't enough to gold to cover the amount of dollars in circulation.  Currencies were allowed to float free for the first time since 1944.