Here's Looking at you, kid 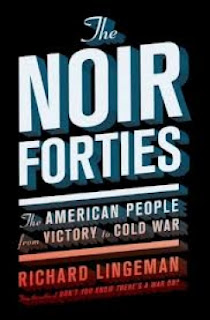 This book sounds really interesting.  Richard Lingeman is an unabashed liberal and cultural historian who takes us back to the "inter-war" years between WWII and the Cold War, roughly 1945-1950, and captures the mood of the time.  Lingeman lived through that time so he gives it an immediacy other authors are not able to, and deals with a specific period of time where the US could have gone anyway it liked on the open road that stretched out before it, but chose the most narrow way.  To read the author's preface, Lingeman doesn't look back in anger but rather bemusement.  There is even a chapter on "The Lonely Passion of Henry Wallace," as he draws heavily on book and movie references, particularly noir film references of the time, noting in his preface that this was the leading cultural reference at the time in films and in the highly popular pulp fiction.
Posted by James Ferguson at 9:25 AM