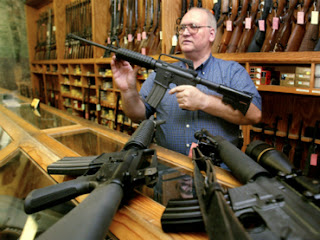 The NRA has plunged to a new low by coming out with a list of National Organizations with Anti-Gun Policies.  It has been dubbed the "Enemies List" in the media, but at least the NRA was relatively careful with its wording, unlike Sarah Palin a few years back when she literally "targeted" Congressional races, including that of Gabby Giffords, which landed her in a lot of hot water when Giffords was shot.  But, the intent is clear.  The NRA wants its supporters to know who the "bad guys" are when it comes to "anti-gun" legislation.

Among those organizations listed are AARP, the Episcopal Church (Washington office), the National Education Association, the American Academy of Ambulatory Care Service, The National Organization of Women, The YWCA and many others.  It once again demonstrates the NRA is less an organization concerned with gun safety than it is a political action committee, using its political muscle to not only attack what it perceives as local, state and federal anti-gun legislation, but those organizations that press for such legislation.

In some ways, this is good because it finally lets the cat out of the bag.  We are really beginning to see the NRA leadership for what it is -- a bunch of paranoid schizophrenics who seem incapable of accepting legislation that tries to promote sensible gun control, i.e. the Brady Bill and the "Clinton assault weapons ban."   The NRA has gone into hyper-drive in attacking the President and everyone else who supports the return of the assault weapons ban or tries to shore up the Brady Bill as "elitist hypocrites."   These measures might make it a little difficult for guys like Jared Loughner to purchase a gun and go out and shoot a Congresswoman in the head, and maybe deter women like Nancy Lanza from stocking up on assault weapons in fear of a coming Armageddon.

Instead, you see idiots like Larry Ward having the audacity to say that if Martin Luther King, Jr. were alive today he would be against gun control, and making other outrageous claims as Gun Appreciation Day just happened to coincide with MLK Jr.'s birthday this year.  His is not the only attempt to link the right to bear arms to the civil rights struggle.  Then we have the notorious NRA ad that specifically targeted Obama's daughters, forcing even Joe Scarborough to shake his head in disbelief and wonder what is wrong with these people.  Wayne LaPierre defended that ad. 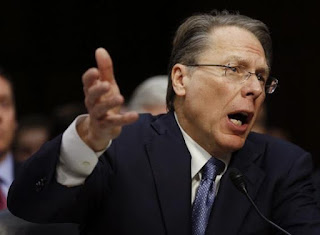 Notice how the NRA also sneaked a swipe at Obama over taxes into that ad, once again illustrating that the NRA is little more than a Republican political fundraising machine.  Here we are, down to rock bottom again, leading many within their own ranks to wonder what the hell is going on.
Posted by James Ferguson at 7:45 PM