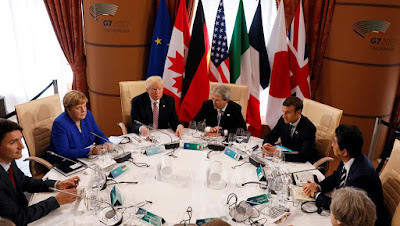 It seems the good leaders at the G7 summit in Italy tried to nudge Trump toward accepting the Paris Climate Agreement.  The best they could get in the way of a response from his staff is that Trump's views on climate change are "evolving," and that he will get back to them next week.  Of course, his view can't get much worse than it is now, so we will take this as a positive turn.

At the heart of the climate exchange "debate" is the cognitive bias (to use a gentle term) being exhibiting by a large number of conservatives who see global warming as a conspiracy,  voiced by Trump on the campaign trail, to limit US industrial production.  These persons see power as only being produced by coal, oil and natural gas, and refuse to accept alternative forms of energy production.

These conservatives are oblivious of the number of new jobs the solar and wind energy sector has created this past decade, outpacing all of the fossil-fuel industries by a wide margin. In fact, coal companies are themselves switching to solar, turning the old adage, "if you can't beat 'em, join 'em," on its ear.

However, many fossil fuel advocates are actually fighting wind farms in "coal country," believing they take away their jobs.  Coal and oil companies hire engineers and scientists to lambaste the proliferation of solar and wind farms.   This particular article, penned in 2011, points to the inordinate bird kill by malicious wind turbines along a West Virginia mountain ridge line.

The irony is that coal kills far more birds than all the other energy sources combined.  In fact solar and wind power resulted in the fewest bird kills of any energy source, except maybe hydropower and geothermal which aren't listed in the chart.  Yet, this cognitive bias remains prominent in conservative circles because it helps to feed the arguments against turning to sustainable forms of energy.

I suppose this has been the case throughout history as our country switches from one major energy source to another.  The whale oil industry wasn't at all happy with the introduction of kerosene in the 19th century, fighting it tooth and nail.  Coal has managed to survive the ever-shifting energy landscape, but now finds itself in a very precarious situation.  There was a big push for coal liquefaction a few years ago, but the cost of producing it far outweighed its economic gain at the pump.  Coal is going the way of whale oil, like it or not.

But, Trump made all these promises on the campaign trail.  He vowed to bring the coal industry back, even when many within that industry are making the shift.  I suppose this is part of his "evolving" view on climate change.  There really isn't this driving force to re-energize the coal industry at home or abroad.

Many power plants are switching to natural gas and other cleaner and more efficient sources to meet the energy needs of their clients.  This is something Trump's advisers should have told him on the campaign trail.  However, it would have made him sound too much like a Democrat or one of those RINO's like Arnold Schwarzenegger.   Trump based his campaign entirely on appealing to the lowest common denominator of the conservative political base.

I avoid saying Republican, because you will find many of these cognitively biased conservatives in the Democratic Party.  Kentucky and West Virginia are prime examples of this.   Many notable Republicans support renewable forms of energy, although the big push for years has been nuclear power.  Yet, somehow this doesn't translate into the mainstream conservative media, which all of the sudden has this great concern for birds.

Mostly, conservatives don't like the idea that this change is being imposed on them, kind of like when Jimmy Carter tried to impose the metric system on the US back in the late 1970s.  It was a failed experiment, quickly overturned by the Reagan administration in the early 80s.  Many conservatives prefer their antiquated notion of American society even if the only thing that is still marked in the English system on cars is the odometer, speedometer and radius of tires.

As it would have been no big deal to switch to metric back in the 70s, given metric equivalents to all the English standard sizes, it is no big deal to switch to sustainable forms of energy today.  Such a switch generates jobs because of the need to retool industry and society itself.  This is what Italian PM Paolo Gentiloni gently hinted at in his private conversations with Trump at the summit.

The real culprit is not so much the President as it is the oil and coal companies that currently have Trump's ear.  If we can get these so-called energy companies to make the switch then what choice does Trump have?  We can only hope that more coal companies like Berkeley Energy Group in Kentucky see the light.
Posted by James Ferguson at 12:08 PM