Frankly, my dear, I don't give a damn 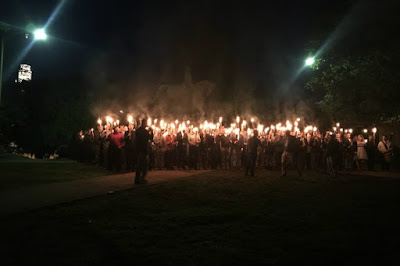 Protests have emerged in New Orleans and Richmond over the removal of Civil War monuments, notably the statues of Generals Robert E. Lee and Stonewall Jackson, two of the most revered figures from the era.  The protest in Richmond looked like something out of Birth of a Nation, replete with blazing torches.  For many white Southerners these statues represent heritage, but in most cases the monuments were put up long after the war and more in response to federal efforts to "reconstruct" the Southern states.

Lee Circle in New Orleans is a prime example of this.  Protests were less ominous in tone but displayed the same ignorance.  The Circle was renamed in 1877, the year Reconstruction was officially repealed, and the monument erected in 1884.  This monument had less to do with Lee, who died in 1870, than it had to do with winning the battle over Reconstruction.

Southern states had fought this reform act tooth and nail ever since it began in 1863.  Louisiana was one of the first states to undergo Reconstruction, having fallen to Union forces in 1862.  With the Emancipation Proclamation in 1863, and the imposition of federal authority, New Orleans went through quite a metamorphosis in the 1860s and 70s, often met with violent protests.

The infamous election of 1876 was the turning point.  Rutherford B. Hayes edged out Samuel Tilden by one electoral vote thanks in large part to Louisiana, Florida and South Carolina still being under federal authority and the Republicans able to stuff the ballot boxes.  In a gesture of compromise, Hayes called for the repeal of Reconstruction, which was pretty much dead anyway, paving the way for Southern states to reclaim their political voice.  It was under these circumstances that Place du Tivoli became Lee Circle.

Throughout the South there were many examples of this.  The Civil War monuments became a way for Southern states to reclaim their "heritage."  However, these monuments were little more than acts of defiance made further manifest in the Jim Crow laws that most Southern states passed in the early 20th century, subjugating Blacks once again to plantation-style politics.

Most of these states had been Democratic before the War and were even more staunchly Democratic after Reconstruction.  Louisiana would not see a Republican governor again until 1979.   I remember my father registering as a Democrat just so he could vote in primary elections as Republicans were so few in Northwest Florida that they often ran unopposed in the primaries, only to lose in the general election.

The second turning point came with the Civil Rights movement.  Southern Democrats, or Dixiecrats as they were referred to then, had long kept the Democratic Party from initiating any change in the plantation-style politics of the South.  Franklin D. Roosevelt was too afraid to sign onto an anti-lynching bill in 1938 out of fear he would lose the Southern vote in the 1940 general election.  He picked Harry S. Truman to replace Henry Wallace in the 1944 election, similarly to placate Southern interests, as Wallace was deemed too radical in his progressive views.

The South literally held the country by the balls, stopping any sort of Congressional legislation that would affect their interests. This came to a screeching halt with the death of John F. Kennedy.  Lyndon B. Johnson was effectively able to use this cathartic moment to pass Civil Rights legislation through Congress, allying Republicans to offset the loss of Dixiecrats.  LBJ was being modest when he said "we have lost the South for a generation."

What started as a trickle became a raging torrent with the election of Ronald Reagan, as a vast number of Southern Democrats had turned Republican by the 1980s.  They had gotten over their aversion to the Party of Lincoln, and now cast the Democratic Party as traitorous to their cause.

To hear conservative demagogues today, you would never know this. They see their party grounded in Lincoln, thanks to a proliferation of conservative books on the subject, and the Democrats as the ones who initiated all those Jim Crow laws.  They have even reframed the Civil Rights Bill as a Republican piece of legislation.  Yet, they still want to claim Generals Robert E. Lee and Stonewall Jackson as their heroes, both of whom were Democrats.  For obvious reasons, Lee endorsed Horatio Seymour over U.S. Grant in the 1968 election.

Many southern conservatives want to hold onto their antebellum history in the form of Civil War monuments and Dixie flags, but also be seen as Lincoln Republicans.  I really don't know how you reconcile this, but quite a number of prominent conservatives have tried, recasting Lincoln less as a liberal progressive and more as a conservative pragmatist.

Perhaps the saddest thing in American History is that the Civil War is still alive and well in many persons' minds.  It doesn't help that Civil War books are often bestsellers, like Margaret Mitchell's Gone With the Wind, and made into to equally popular movies.  You will find reenactments of famous battles throughout the South.

I was once locked out of the antebellum mansion I was staying at near Charleston by a Civil War guard unit that had commandeered the site for the weekend.  They wouldn't let me pass in my truck.  I had to call the director of the Charleston Historical Society, which owned the mansion, to gain entry.  I probably should have just gone away for the weekend, as I had to put up with the infernal racket of musket fire throughout the day and campfires at night.

As long as we keep the embers of this war alive there really will be no reconciliation.  The monuments mean different things to different people.  Richmond and New Orleans have determined it is time to put the Civil War behind them, as the demographics of these cities have changed considerably since that time.  No doubt, there will still be museums to honor this peculiar legacy, but public monuments will come down, just as the Dixie flag has come down at statehouses throughout the South.

You can still have a Dixie flag on the rear window of your pick-up truck or stretch out on a Dixie beach towel at the nearest beach, flaunting this divisive "heritage," as is your peculiar wish, but don't expect the rest of us to play along.  As Rhett Butler said to Scarlett, "Frankly, my dear, I don't give a damn."