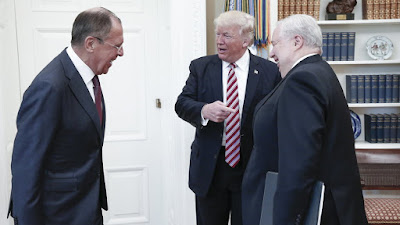 The White House tried to do damage control yesterday, employing a wide range of surrogates to go on the airwaves to defuse the summary dismissal of James Comey.  We had Newt and Rand and Condi, among many others saying it was a long time coming and/or it was time to move on from the investigation into Russian collusion.  But, probably the most interesting of all was Sarah Huckabee Sanders the lead press secretary at yesterday's press conference.  Where's Spicey?

Meanwhile, Trump was hosting none other than the Russian Foreign Minister Sergei Lavrov and Russian ambassador Sergei Kislyak at the White House.  I don't know about you, but this doesn't look any better for Trump than did Bill Clinton meeting Loretta Lynch on the tarmac of a Phoenix airport when the Justice Department was conducting an investigation into Hillary's role in the Benghazi attack.  Many pundits point to that "chance encounter" as one of the main reasons for Hillary's loss, as it cast further doubt on her integrity.   Then Candidate Trump simply called the meeting "Terrible."

I don't know which is more terrible?  Bill trying to cozy up to Attorney General Lynch, or Trump to Foreign Minister Lavrov, who is the official mouthpiece of the Kremlin.  Throw in Kislyak, who is at the center of the Senate and House probes into Russian hacking, and you really have to wonder what the White House is thinking?

Kislyak has been the connection for many of Trump's advisers.  In addition to Flynn, there are recorded meetings with Kushner, Carter Page, Jeff Sessions and his own son Donnie. much of which has been leaked to the press.  I suppose one of the reasons Comey was let go is because the Trump administration may have thought the FBI was leaking this information itself.  How else?

The meetings could have been cordial and had nothing to do with the election, but the fact that most of these persons did not disclose these meetings makes you wonder what was really going on.  My guess is that the level of intrigue goes far beyond the White House, as Jeff Sessions was still a Senate member at the time he met with Kislyak.  It seems that Russia not only compromised Flynn but a great number of other high level politicians in an effort to lift the sanctions placed by the Obama administration.

This would also explain why Mitch McConnell is so reticent to name a special prosecutor, claiming it would only serve to muddy the ongoing Congressional investigations.  Flynn, Sessions and Jared Kushner are just the tip of the iceberg.

During the Senate hearings, I believe it was Sen. Coons who asked James Clapper if there was any collusion between American alt-right blogs and the Russian propaganda channels that were disseminating the fake news stories that sought to undermine Hillary's campaign.  Clapper seemed to think the American blogs unwittingly picked up the stories because they fed into their narratives.  He couldn't prove otherwise.

RT and Sputnik are the two main arms of the Russian propaganda machine, and it was at a tenth anniversary gala of RT that Flynn was paid 35 to 45,000 dollar to sit next to Putin.  During the campaign, Flynn often interacted with alt-right blogs, re-tweeted their stories, including the infamous "pizzagate conspiracy" that Alex Jones was later forced to admit he had been punked.

While Flynn was an operative, others more likely just fed off the RT and Sputnik fake news stories because it supported their views.  Russia very cleverly packaged these stories to fit snugly into pre-existing conservative beliefs.  As James Clapper also noted, the Soviet Union had been doing this since the 50s and no doubt Putin saw an inexpensive ways to create unrest in the American body politic.  The only question is how many others were involved in this.

My guess is that Newt was more than willing to be used in this regard, not just because he has voiced his admiration for Putin in the past, but he has an ax to grind.  Not only was Newt forced out of Congress, but he was made a buffoon on the 2012 campaign trail when he ran for President.  Gingrich was on Newsmax yesterday saying Democrats should be cheering the firing of James Comey.

We will probably never know how many persons were involved in this elaborate election scam, at least not in the near future.  However, I have to think we haven't heard the last from James Comey, who has been invited to speak before the Senate Judiciary Committee next week.

As for Trump, it is just "terrible" how he tries to cover up his involvement in the scandal, going so far as to hire a team of Washington lawyers to reaffirm he had no role in the collusion that is believed to have taken place between the Russian government and his administration members in engineering the outcome of the 2016 election.  Lavrov and Kislyak were grinning ear to ear during the WH meeting.  All we have to see now is an executive order freeing US oil companies to engage with Russia in tapping their Arctic oil reserve.  Something Rex Tillerson no doubt would like to see done.  Coincidence, perhaps?