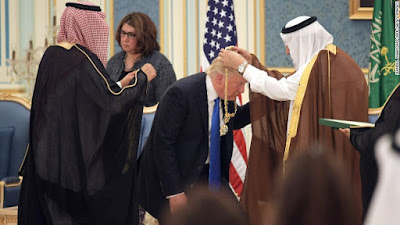 His Trumpness was feted by the House of Saud in an evening he probably won't be able to live down anytime soon.  Getting a gold chain that even Jay Z would be envious of is standard procedure, but the royal horse escort and the sword dance was something I don't remember seeing before.  King Salman went all out to honor Trump, knowing exactly how to appeal to our extremely vain president, who summed up the royal reception as "tremendous!"

At the center of this "historic event" is a $115 billion arms deal, which the Trump administration claims it negotiated itself.  In actual fact, it was a deal struck last September before he was even elected, but that Obama had held off on because of egregious human rights violations.  His Trumpness appears less concerned about this, as his administration put precision-guided munitions back into the deal.  We will see if these warheads come back to haunt us.

Trump was so anxious to deflect attention away from the ongoing probe into Russia collusion in the 2016 election, that he would agree to just about anything to cast him in a favorable light.  Not sure how this arms deal does this, but he offered up a speech on Islamic terrorism to make clear what those arms are intended for.   It must have taken all the reserve he could muster to tone down his usual rhetoric and call for unity in the face of this scourge, largely bankrolled by Saudi oil sheiks, with connections to the royal family.

You won't find Saudi Arabia on the travel ban the Trump administration is still trying to push through the courts.  Trump himself has sizable investments in the oil-rich country.  He registered eight companies in the country during his campaign alone, and the deal he ultimately struck with the House of Saud promises up to $300 billion in investments during his term, in addition to a free flow of arms, which is why you see a happy Rex Tillerson joining in the sword dance.  I guess this is designed to help offset the stagnant oil prices.

It is going to be pretty hard to top this performance over the next week. Trump had hoped to fly into the Masada by helicopter but Israel nixed the idea.  The disgruntled president chose to abandon his trip to Masada all together, but I'm sure he will try to make the best of his short stay in the Levant.

Bibi Netanyahu has to be a bit disappointed that the Trump administration hasn't been more favorable to his government.  He is having a very hard time keeping his ministers in line.  Meanwhile, Trump's advisers are strongly cautioning him to maintain an even keel here, as one of the goals of this administration is to restart discussions on a separate Palestinian state, something Netanyahu has tried to avoid ever since he came back into power in 2009.  Israel has ratcheted up settlements in the West Bank and doesn't seem in any hurry to discuss tedious land negotiations, as Israel has carved off about 10 per cent of the West Bank as its own over the five decades since it annexed the Palestinian territories.  But, I'm sure Bibi will make some kind of gesture toward restarting negotiations to please His Trumpness.

Beyond that, who knows how this trip will turn out?  He obviously won't get a royal welcome at the Vatican or anywhere else in Europe.   He will get the opportunity to address both NATO and the G7, which will at least make him look "Presidential."   It's a long time to be on the road, and it is going to a lot of coddling aboard Air Force One to keep His Trumpness happy.