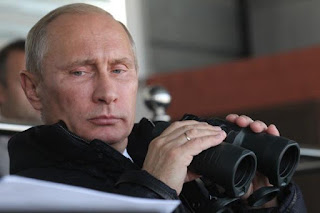 Seems our man in the Kremlin is enjoying the way events are unfolding so much that he wants to get his hand in yet again.  Vladimir Putin has offered to hand over transcripts of the meeting that recently took place between Trump and Lavrov to calm anxieties in what he regards as a "political schizophrenia" taking place in America.

I'm not sure what the game being played here is, but it is very similar to what took place between Russia and Turkey in Syria.  If you recall, Turkey shot down a Russian fighter jet in December, 2015, which Erdogan said encroached on Turkish air space following a bombing mission over a border Syrian town.  Things got quite heated with Russia placing economic sanctions of its own on Turkey in the form of a tourist boycott.  This apparently shook Erdogan up so much that after a few months he apologized to Putin, and ever since the two have been comrades in arms in the ongoing battle over Syria.

Trump has been unable to even bring up the subject of sanction relief in regard to Russia since assuming office, let alone disavow NATO which he had done repeatedly on the campaign trail.  As much as he would like to be friends with Russia, US lawmakers and members within his own cabinet have said no.  He even went so far as to order a missile strike on Syria, while eating chocolate cake, over the alleged use of chemical weapons in a recent uprising.  All of which has stung Russia but Putin being the ever patient man that he is just bided his time.

Who knows what the inscrutable Russian president has on his mind.  Is he trying to save Donald or sink him ever deeper into the vortex of his downward spiraling administration?  I don't know how House of Cards is going to compete with the current Oval Office when it begins a new season later this month.  What could possibly trump this ever-widening Russian scandal, which Putin so blithely dismisses as paranoia on America's part?  Will Trump accidentally divulge he is a closet homosexual and that he went through three marriages, countless affairs, and at least five children in an effort to disguise it?

Putin is right in that we have blown the Russian connections out of proportion to the crimes being committed here.  The filtering of "fake stories" into the American news cycle, which Russia is accused of doing through an internet army of trolls and bots, would never have occurred if Americans weren't so gullible.  Not only conservative blogs and radio stations picked up these stories, so did the mainstream media in the soap opera that was Hillary's e-mail server scandal and the subsequent DNC e-mail hacking.

None of the mainstream media outlets have yet to admit culpability in this,.  They spent so much time poring over the divulged e-mails on wikileaks and other websites that they ignored the statement issued by the White House in July of 2016 that Russia was believed to be behind the hacks.  All these e-mails were just too good to pass up on, and so the Russian hacking story got buried.

We also had all those salacious stories of Donald Trump's misogyny that began filling the news cycle in early October.  This appeared to doom our would-be President, but FBI Director Comey decided to re-open investigations into Hillary's e-mail server in late October, sending her substantial lead in the polls into a tail spin.

Through it all, the media was riddled with fake stories originating from RT and Sputnik, focusing mainly on Hillary's criminality.  These stories linked Hillary to a "shadowy cabal of global financiers" and potentially escalating tensions with Russia to the point of nuclear war.  Most of the stories were as absurd as Mel Brook's High Anxiety, but they gained traction in the American media because they fed into the narrative set by conservative media and the Trump campaign of "Crooked Hillary."

Obviously, Vladimir Putin is not willing to leave well enough alone.  This latest missive is gauged to put the American news media into a total frenzy.  I don't think he is trying to save Donald but rather undermine what little there is left of his administration by giving the American media one more reason to play up the Russian connections.

His aim all along was to undermine what little American faith there is in its news media by planting stories that would turn the general election into a farce.  None of it could have happened without American media's complicity, either directly in the case of the more nefarious conservative blogs or indirectly in the case of the mainstream media's insatiable appetite for news stories wherever they came from.  With literally no checks and balances on the dissemination of  news stories, the American media was an easy mark.

We've seen virtually all the major news networks get punked time and again, forced to issue painful retractions.  What really stung the media this time around was how badly they missed the final results of the election, which Trump has continually boasted about.  This is obviously something the media hasn't gotten over as it tries now to act as a watchdog to all the malfeasances occurring in the White House, playing each one up like it will be Trump's last act.  Putin is a very unsavory figure, but at some point our media has to hold itself accountable for the debacle that occurred last November, when Trump was elected to the highest office.

I don't think that will ever happen so in the meantime we see Count Vlad prodding the American media yet again.

Posted by James Ferguson at 5:32 PM