The Melancholy of Resistance 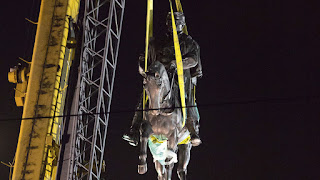 Virgil, quick, there goes the Robert E. Lee,
And the P.G.T. Beauregard too.

You may or may not know the lyrics to the Band's classic song, but you can hear it playing in the background as New Orleans takes down its Civil War monuments in the dead of night.  Workers are even wearing masks to hide their identities out of fear of reprisals.

City officials have now removed three of four monuments.  Gen. Beauregard was a native son of Louisiana, born on a plantation outside New Orleans, and rose to prominence in the U.S. Army, serving as an engineer to Gen. Winfield Scott in the Mexican-American War from 1846-48.  But, it is not for these deeds that he is remembered.  Beauregard was one of the prominent generals in President Jefferson Davis' Confederate Army.  He led the siege on Fort Sumter in Charleston harbor in April, 1861, that served as the toll bell for the Civil War.

Colonel Robert Anderson, from the slave state of Kentucky, chose to defend the federal fort rather than give it up to South Carolina.  It was a massive structure, meant to serve as part of the coastal protection system the United States devised should the Brits think of invading America again.  Anderson was literally caught between a rock and a hard place, defending the last of the federal military sites in the recently seceded Southern states, while a newly elected President Lincoln tried to hold onto border states like Virginia, Tennessee, Kentucky and North Carolina, hoping to stop this war before it began.

As we know, the sentiments ran too deep among the Secessionists to turn back . Lincoln only succeeded in retaining Kentucky and newly created West Virginia.  General Beauregard launched his first cannon balls in the early morning hours of April 12.  Surprisingly, no one was hurt in the two-day bombardment.  It was only when Anderson chose to surrender the fort, as Lincoln's reinforcements were late in coming, that two Union soldiers died from the backfire of their own cannons in paying tribute to the American flag as it came down.

I had the great pleasure of leading an Historic American Buildings Survey team in the documentation of Fort Sumter during the summer of 1991.   I prepared an historic structures report to go along with the meticulous drawings my team did.  The fort is steeped in history from before, during and after the Civil War, with reams of documents and drawings available in the national historic park's archives.

I discovered that the fort was actually listing toward the Atlantic side when I surveyed the five corners of the pentagonal walls.  At first I thought this was a miscalculation on my part, but later I found in the archive documents that this had been a problem from the outset, as the fort was built on a sandbar and no amount of timber caissons and rock ballast was going to keep the fort level.  By the 1950s this tilt was significant enough that the Army Corps of Engineers tried to address the problem, but by my calculations the fort had sunk even more in the 40 years since those reports were prepared.  I wrote all this up for the Cultural Resources Management Journal, which you can read in the article, Fort Sumter: Preserving its Crumbling Walls.

History is one thing.  Monuments are another.  There are any number of cultural heritage sites from the Civil War preserved throughout the Southern states.  These are valuable markers in our historic American landscape and need to be preserved.  However, monuments come into being for a variety of reasons, mostly political, and serve an entirely different purpose.

These political markers are designed to establish authority, much in the same way statues of Lenin and Stalin were erected throughout the Soviet Union and its satellite countries in Eastern Europe.  As we saw in Vilnius and elsewhere when these countries gained their independence in 1991, these statues came down.

For New Orleans this had been a long time coming.  The demographics of the city has changed substantially since the Civil War, and most residents no longer wanted to be continually reminded of that era in the form of Lee and Beauregard and Jefferson Davis casting their shadows over the city.  There are obviously those who took exception to this decision, and have protested the removal of these iconic statues.

I can understand to some degree the disillusion being expressed here, somewhat akin to that of Virgil in The Night They Drove Old Dixie Down.  The idea of a Lost Cause has a noble ring to it, no matter how ignoble the events that inspired it.

When the dust settles I think the vast majority of residents will move on.   After all, this is a city far more proud of its jazz heritage and Mardi Gras than it is its Civil War legacy, and deservedly so as jazz is something New Orleans not only gave to the nation but to the world.  The Civil War is a painful legacy that one struggles with, like the death of a contentious relative.  We don't need to be reminded of this everyday.

I'm sure the bronze statue of P.G.T. Beauregard on horseback will find a place somewhere.  Who knows maybe even a Dixieland theme park, like Grutas Park in Lithuania, aka "Stalin World," where these monuments can find a home.