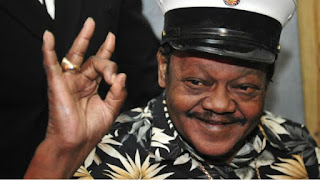 I'm surprised Trump didn't find a way to politicize the death of Fats Domino.  He politicized almost everything else last week including what should have been a simple Halloween trick or treat session with the kids of the White House press corps.

Many already thought Fats Domino was long gone until he was discovered in flooded New Orleans.  He had been awarded a National Medal of Arts by Bill Clinton in 1998, but Fats had pretty much disappeared from the music scene.  He wasn't touring.  There appeared to be little interest in his music with only a handful of compilations available on CD.  There was no great tribute band for him like there had been for Chuck Berry, B.B. King and others from his era.  Fats was living a quiet life in the lower ninth ward until Katrina hit.

His rescue became front page news and soon artists were scrambling to put together a tribute to him, releasing Goin' Home: A Tribute to Fats Domino, which included Robert Plant, Elton John, Paul McCartney among many others.  He put out a new album of his own, Alive and Kicking, showing he still had the groove in him after all those lost years.

It's really amazing that one of the pioneer figures in rock and roll music could be forgotten, but this is what happens when you have a 25 year gap between albums.  Even his 1981 album was no more than a compilation of hits.  He hadn't released anything new since the early 70s.

Not like B.B. King and Chuck Berry were doing anything new, but they were both very active with Eric Clapton and Keith Richards putting together albums for them, and assembling star-studded bands to back them up.  You have to make yourself visible if you want to be seen.

After the 2007 tribute album, Fats was pretty much forgotten again, but at least he enjoyed a small measure of comfort in his waning years.  His house had been rebuilt.  A few of his possessions restored.  He still garnered attention in New Orleans.  The home town Saints were not going to let him go out without making a special tribute, which they wore in this past Sunday's game.

Now that the city has taken down its Civil War memorials, there should be place for one of its truly great native sons.
Posted by James Ferguson at 1:36 PM