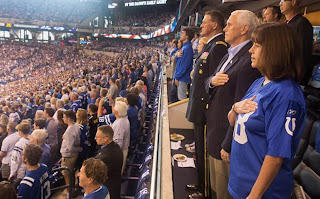 This past weekend, Mike Pence attended an Indianapolis game seemingly for the sole purpose of walking out after the national anthem when several Colts knelt on the sidelines.  Jerry Jones issued a surly statement that he would bench any player that didn't stand for the anthem.  This political grandstanding drew attention to struggling football teams.  Indianapolis needed overtime to get past winless San Francisco and Dallas got thumped by Green Bay.

Maybe this was the "storm" Trump was referring to, as his White House is determined to win this battle with the NFL, using Pence as a proxy and allying Jerry Jones to its cause.  No other owners issued such an ultimatum.  You figure at some point, the NFL will reach a compromise with the players to end this stalemate that has drug into the fifth week of the season.

It would probably go a long way if the owners quit blacklisting Colin Kaepernick, who was passed over last week by Brandon Weeden when the Tennessee Titans went shopping for an extra quarterback.  This is utterly ridiculous since Weeden has never been anything more than a journeyman QB and didn't even play Sunday.  There was a rumor floating around that Kaepernick would stand for the anthem if called back to the league, but it turns out the story was unsubstantiated.

It would also help if the media would more often mention the reason for these protests, rather than focusing almost exclusively on the act itself.  Anderson Cooper hosted a town hall with players and activists to discuss police racial profiling and brutality, but Trump's tweets continue to get the most attention.  Nothing the media loves more than flame throwers, although for some strange reason Colin Kaepernick was not invited to the CNN town hall.  Nor did he appear on the cover of Sports Illustrated that featured players from around the sports world who support the protests.  That's just how toxic he has become.

Yet, Colin's no. 7 jersey remains very much in demand, and he is finding his actions being emulated by cheerleaders, anthem singers, college and high school players around the country, even if it means getting booted off the team.  There have also been similar protests at the pee wee football level.  This is an issue that isn't going away until the NFL and in turn the nation addresses it in a meaningful way.

Of course it doesn't help when you have an idiot in the White House throwing gas on the flames.  Trump took credit for Mike Pence's walkout.  I'm surprised he didn't take credit for Jones' surly statement.  But, all this grandstanding is counter-intuitive, as it has only served to draw more attention to the issue and result in viewers tuning into the games if for no other reason than to see if the players buckle under the pressure.  With the NBA regular season soon to kick off, the situation could get even worse, as back in 2014 several NBA players made their feelings known on the same issue long before Colin Kaepernick took a knee.

Athletes have every right to make their feelings known on issues they consider important to them.  This idea that their voices don't count is absurd and only reinforces the "plantation mentality" since virtually all the players being singled out in social media are black.  It doesn't matter that high profile white players like Tom Brady, Aaron Rodgers an Drew Brees have all voiced support for their teammates, the social media is obsessed with lightning rod players like Michael Bennett, offering up fake memes as red meat to the conservative audience.

A better president would seek to calm anxieties, offer a summit to discuss police racial profiling and brutality, which are very real issues in the Black and Hispanic communities.  Instead, we have a President who openly uses his Vice-President to stoke the flames of unrest, seemingly for no other reason to boost his approval ratings.  Sad.

Posted by James Ferguson at 3:42 PM