The General and the Madam 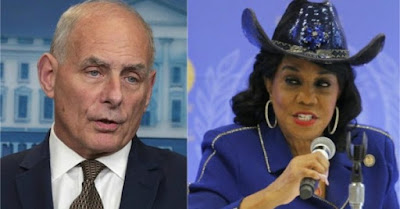 In more ways than one Frederica Wilson exposed the White House.  We all know Trump is an asshole, but to this point many thought Gen. Kelly was one of the few sane persons in his administration, trying to bring some order to the White House.  That all flew out the window this past week.

Not only did Kelly allow Trump to politicize the death of his son in response to the media questioning the president's sincerity when it came to providing comfort to Gold Star families, but tried to play Trump's hatchet man in regard to Congresswoman Wilson's condemnation of his commander's brusque response to a war widow in Miami, who she happened to personally know.

The former general was wrong on so many levels that probably his best course at this point is to resign.  He hasn't been able to bring order to the White House and now he has revealed himself to be little more than a stooge, willing to do anything to protect the president.

Gen. Kelly had been noncommittal during the campaign, saying he was willing to work with either Trump or Clinton when the question came up, but then he was still serving in the military.  Many assumed that he would be a non-partisan member of Trump's administration, as many feel Gen. Mattis is as well, but it seems he is firmly in the Trump camp, willing to defend anything the president says even when it goes against his personal and military grain.

One can only assume the former general tried to coach the president on these phone calls since Trump would have had no experience in this regard.  He had probably been after Trump for days to call the grieving families of the four soldiers that where ambushed in Niger, but the president was too busy playing golf and carrying on a twitter war with the NFL to pay much notice.  When Trump finally got around to doing so ten days later, he did so perfunctorily not expecting anyone to call him on it.

Enter Ms. Wilson who happened to be in the car with Myeshia Johnson when Trump called, along with an aunt who similarly heard the call on the speaker phone.  Ms. Wilson wasted no time in calling out the president, and her account has been confirmed by Ms. Johnson's aunt.  This left Trump having to claim some kind of "proof" otherwise, which turned out to be Gen. Kelly being there with him when he made the call.

Gen. Kelly probably could have gotten away with it had he kept his message simple.  Instead, he chose to go after Frederica Wilson's character, calling her an "empty barrel," and suggesting she was using the incident for her own political gain.  There is some truth to this allegation but it didn't address the main issue of whether Trump had any idea who he was talking to or who he was referring to on the phone, since he apparently didn't mention Ms. Johnson or her husband by name, repeatedly referring to the fallen soldier as "your guy."

The former general has since claimed that he was the one who told the president to say much that was in the condolence call, including the infamous "he knew what he signed up for," which is what most rankled the Johnson family and Ms. Wilson.  Families are expecting to feel a little warmth from the president at a time like this,  Ms. Wilson said, not being reminded of their loved ones' duties.

None of this would have mattered if Trump hadn't politicized these condolence calls by trying to claim he went beyond any former president by both calling and writing all the relatives of the fallen soldiers.  As it turns out, Trump has only been in contact with about half of the relatives based on a sample taken by AP.

The White House response to all this is the media should quit criticizing the President and the General.  Ms. Huckabee chastised reporters on Friday for questioning the General's account, even though he got many things wrong about the incident he used to cast Ms. Wilson as an "empty barrel."

Like everything else surrounding Hurricane Donald, this incident will probably be swept away.  The media milks it for what it's worth and moves on.  However, if the White House was hoping to gag Frederica Wilson, the opposite has happened.  She is now a national figure, and one who will continue to go after Trump every chance she gets.  I suppose in a perverse way she can thank Gen. Kelly for that.