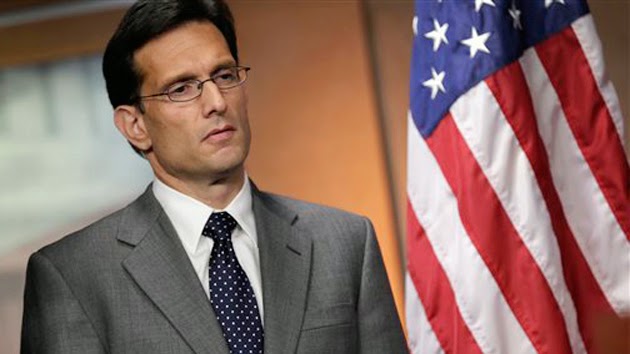 Seems the death of the Tea Party was a bit premature, as they managed to pull off a major upset in Virginia by knocking off Eric Cantor, and for less than one Cantor's campaign team spent on steaks.  For the last four years, Cantor has been Boehner's bull dog in the House but now it seems he will step down as majority leader in the wake of this stunning defeat.  But, Democrats shouldn't get too giddy because Cantor's district is heavily Republican and Dave Brat will most likely take his seat in the next session, barring a major foot-in-mouth moment.

Score one for Laura Ingraham who plugged Brat hard and heavy, having felt that Cantor had lost his "reputation."  She is the conservative host of a Virginia-based talk show that gave Brat plenty of free air time when the money was behind Cantor.   It is also a big knock against immigration reform, as Brat used this issue to hound Cantor throughout the campaign.

Not that Cantor was ever a major proponent of immigration reform.  In fact, he did his best to obstruct such legislation ever getting to the House floor.  But, he made the mistake of trying to play both sides of the issue in the press and if there is anything the Teabaggers can't stand it is a two-faced conservative.

However, talk of immigration reform didn't seem to hurt Lindsey Graham in South Carolina, as he managed to fend off bevy of challengers in the GOP primaries without having to worry about a run-off, unlike his friend Thad Cochran in Mississippi, who appears to be on the hot seat.  Senate races are statewide, so incumbents generally fair better than do their fellow incumbents in the House.

Cochran is a good ol' boy who probably would have been better advised to step down and enjoy his august years in retirement.  But, Thad just couldn't let it go and decided to give it one more try.  As a result, he faces the ignominious prospect of defeat to an upstart challenger, Chris McDaniel, who has been dubbed the next Ted Cruz.  Not that we need anymore Ted Cruzes, but alas this kind of take-no-prisoners approach to politics appeals greatly to hardline conservatives.  Poor Thad is simply out of step with the new wave in GOP politics, having received a low scorecard from conservative watchdog groups.

So, the GOP has yet to settle its Tea Party problem, despite having swung ever more to the right since 2010.  It seems it was its inability to get what it wanted out of the government shutdown last year that hurt incumbents.  Instead, of seeing this as the cost of their intractable nature, the Tea Party saw the old guard as caving in and sought to challenge each and everyone of the GOP top brass this time around.  Boehner, McConnell, Graham and other key legislators survived, but the loss of Cantor is a major blow.
Posted by James Ferguson at 10:38 AM