What a friend we have in Jesus? 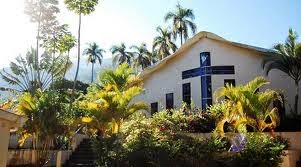 A new documentary sheds light on evangelical attempts to"rehabilitate" their youth.  A recently returned missionary, Kate Logan, traveled to the Dominican Republic to do a documentary on a highly touted evangelical reform school, Escuela Caribe, only to find barbarous cruelty carried out in the name of Christ.

In Kidnapped for Christ, Logan shows teenagers who had literally been plucked from their homes, with their parents' knowledge, and shuttled away to this island school.  Apparently, Logan wasn't familiar with an earlier book, Jesus Land, written by one of the survivors of this insane religious boot camp, which was published the year before she arrived at Escuela Caribe.  Or, she sought to verify Julia Scheeres' horrifying story of the reform school.

It really makes you wonder what conservative evangelists have in mind when they talk about "gay conversion therapy," as one of the victims in Logan's documentary is a gay teen who was sent to the camp by his parents to be reformed.  It took several years for Logan to get this film to production due to threats from the school and the young man's parents.  It premiered at the Slamdance Film Festival in Park City, Utah, earlier this year.

The school was shut down in 2011, apparently for economic reasons.  A new reform school, Crosswinds, now exists in its place, and one can imagine there are many more like them around the world, which will surely keep their doors closed to prying eyes.

The experience shook Kate Logan enough that she now considers herself an agnostic.
Posted by James Ferguson at 10:40 AM