You wonder who the fashion arbiters are today when Rihanna appears in a competely shear dress, with a pair of panties to hide her private parts, at the CFDA Fashion awards.  As expected she created the most stir, but you have to wonder what the designer who fitted Lupita Nyong'o was thinking as well.

This certainly wouldn't have been the case in the 1930s when the "Dress Doctors" instructed women across the country on how to dress smartly and frugally through pamphlets, books and magazines.  You can read the first chapter of Linda Przybyszewski's new book, The Lost Art of Dress, in which she describes the rise of this tight-knit group of home economists.  Good taste was paramount and a woman didn't go flaunting her wares on an unsuspecting public.

By the 50s things began to loosen up a little, but still a certain decorum was expected, which is why Lee Remick created quite a stir for going without a girdle in Anatomy of a Murder.  A woman wasn't supposed to "jiggle," and jiggle is just what Lee Remick did in her pair of slim pants in an early scene of the movie.  In fact, the panties in question came to play an important role in the story. 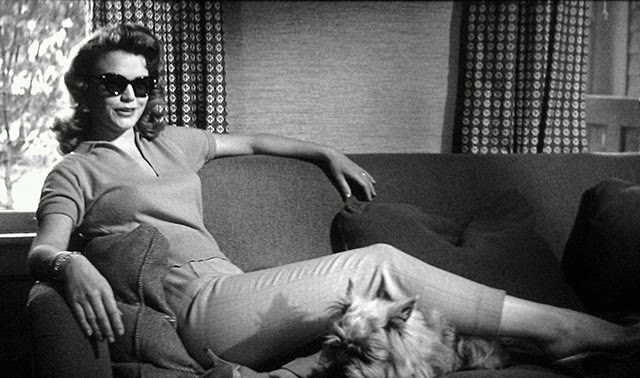 But, it wasn't until the 1960s that women chose to break all rules of convention.  Of course, men didn't adhere much to the rules either, judging by the Love-ins that became front page news by the second half of the decade, ending in the Summer of Love.  The Dress Doctors were an anachronism by this point except maybe in rural towns where social conventions were still adhered to.

Such prude tastes became the subject of ridicule on television and in movies.  Bra-burning came to symbolize militant feminism of the 70s, but the infamous protest of the 1968 Miss America Contest only had women dumping bras, girdles, high-heeled shoes and cosmetics into a symbolic "freedom trash can," not a bonfire of the vanities as luridly described in the press.  Skirts and blouses may have become more shear, but most women were still comfortable wearing undergarments. 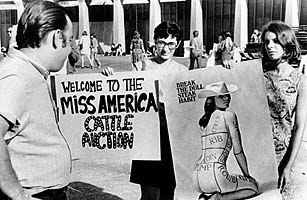 In the 60s and 70s, you never knew where the Maidenform woman would turn up. The undergarment company had been around since the 1920s but had opted for a bold new ad campaign, which could be found in virtually every magazine at the time.  As a young teenager, this was my first exposure to the "feminine mystique," and I would scour my mother's journals for such ads.

While the divas of today represent the extreme in fashion, the smartly tailored dress or women's business suit is still very much in demand.  Michelle Obama has become one of the fashion icons today with her appealing mix of designer fashion and off-the rack clothes that seem a perfect match for almost every occasion.  Not since the divine Jackie Kennedy has a first lady made such a statement in fashion.  So, all is not lost.

Posted by James Ferguson at 1:13 PM