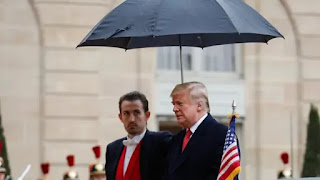 You figure Veterans Day would be a pretty easy call.  After all, Trump has said on multiple occasions how much he loves troops and that no one has done more for the military than he has.  Yet, here he was in Paris, commemorating the historic armistice, which the United States brokered 100 years ago, and he blew it.  In fact, he blew it bigly.

Not only did he fail to visit the American cemetery at Aisne-Marne, but he seemed completely out of touch with events taking place in Paris itself.  The only time he appeared to light up was when he saw Vladimir Putin, and probably when a topless protester tried to throw herself under his motorcade.  For Macron, Merkl and May, he could only look at them with contempt.

Our dear President was very upset that Macron called him out on his use of the term "nationalist."  The word had been haunting him for weeks ever since he first used it at a rally in Houston on October 22.  He later doubled down on it at a press conference, and still seems to view himself as a nationalist even after it was pointed out to him what the term means to a great many people, particularly when recalling WWI and WWII.

Trump equates nationalism with patriotism, which as Macron evocatively described, are the mirror opposites.  It's kind of like embracing both the US flag and the Confederate battle flag, which so many Americans do, failing to realize that these emblems are in stark opposition to each other.  This is what happens when you view history as something you had to take back in high school but paid virtually no attention in class.

He pulled out a stupid conservative trope in his tweets, saying Parisians would be speaking German if it wasn't for the United States.  Not only does he conflate the two world wars, but France may not have fallen to Germany if the United States entered WWII sooner.  The war had been raging for two years before the US finally sent troops to Europe.  By then, France along with most of continental Europe had fallen under German occupation.  This has long been a sore point brushed over by the fact the allies ultimately emerged victorious over the German axis.  Trump had no problem trampling over this highly sensitive history because he has no knowledge of it.

If he had, he would have been much more respectful to European leaders.  Macron had done nothing to warrant the kind of attacks Trump launched at him on twitter, beginning with a surly response to the French president calling on European countries to form a united military to protect itself against foreign threats.  This was a rather odd, given Trump has repeatedly chastised European countries for not investing more in their own militaries.  It seems what he was most upset about was Macron suggesting European countries buy their military hardware in continent rather than from the United States.  Macron had recently called out Belgium for buying an American F-35 fighter jet as being "against European interests."

But, this was Armistice Day in Europe and the President should have saved all his petulant posts for after the events honoring those who had fallen in World War I.  For the most part, he looked disinterested in events.  The rain was no doubt a downer, as were the long-winded speeches about battles and men who fought bravely for their countries.  Subjects he is obviously not interested in.  Maybe someone should have screened Legends of the Fall for him, or at the very least Wonder Woman before going to Paris.

It seems that what really got Trump's goat is that he couldn't have a parade of his own on Veterans Day, which he had been promising ever since he had attended Bastille Day the summer of 2017.  The military advised him against it, largely because this was the centennial of the armistice and Europe was planning a large event in commemoration of WWI.  For a man used to having his interests come first, this was a big blow to his ego.  Add to that a young Macron teaching him about the meaning of nationalism, you can expect a full-blown twitter tantrum.

You really have to wonder how anyone can support the president at this point.  Not only did he disrespect our dearest ally, who has stood with us since the Revolutionary War, but he disrespected our troops.  Making matters worse, he didn't even show up at Arlington because apparently he was suffering from jet lag.  For all those self-professed "nationalists" out there who believe so strongly in the sacrifices of our troops this has to be very disheartening.  But, what can you expect from a president who managed to get five draft deferments on account of his studies and bone spurs?