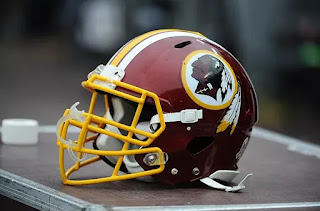 I don't know what's worse: Washington keeping its ridiculous moniker or the throwback uniforms that hint back to the 70s when the Redskins were led by Joe Theismann?  Owner Dan Snyder has refused to budge on the moniker.  He clings to it like one would an aging brand because of the nostalgic comfort it provides.  He even claims Native Americans accept the moniker, pointing to a poll taken in 2016 that showed few really cared anymore.  They have deeper concerns.

Just the same, Snyder should have dropped the logo and remade the team when he had the chance because the Redskins limp along from season to season, not having been to a Super Bowl since 1992.  That's a pretty long drought for this once formidable team.

To be fair, the Redskins aren't the only team with a Native American moniker.  Kansas City still goes by the Chiefs and Seattle fashioned its Seahawk logo after a transformation mask an artist took from The Art of Northwest Coast Indians.  However, these aren't pejoratives like Redskins, and just to emphasize the point, Washington slapped the face of a red-faced Indian on their helmet.  They used to just have an R.

It also makes sense for Seattle to have a Native American moniker since the name of the city is derived from a former local chief.  Kansas City is also derived from a Lakota Indian word, Kanze, meaning "south wind."  Washington has no Native American history to speak of.  It was a city formed from the swamplands of Virginia and Maryland as the national capital, and so one would think the sports team would opt for something more appropriate like the Nationals and the Capitals.  Hard to know where the Wizards came from, but at least it is better than the Bullets.

If Abe Pollan could change the nickname of the basketball team because of the ugly connotations of the Bullets, why can't Dan Snyder?  Unfortunately, he has proven just as obstinate as Jack Kent Cooke, who formerly owned the team.  Many thought Snyder would usher in a new era when he bought the team in 1999, but Dan stuck with the Redskins, refusing to give into Native American groups who called for a new moniker.  You might say the team has been cursed ever since.  Snyder has hired a slough of coaches but has had only five winning records during his tenure and has been one and done in all but one playoffs, that in his first year as owner.

It had been a pretty good season so far, but that horrid injury to Alex Smith midway through the third quarter last week pretty much killed it.  Shades of when Joe Theismann went down in 1985, effectively ending his career.  Snyder thought the team had finally found the right magic after shuffling quarterbacks even more than coaches the past six years.  Now, he'll have to see what Colt McCoy can do against the Cowboys tomorrow.

At some point Snyder will give up.  He bought the team for $800 million, a princely sum in 1999, but it is now worth $3.1 billion, the fifth most valuable football franchise despite two decades of mediocrity.  He is almost universally loathed in the NFL, not just because of his inherit racism but also his misogyny.  Several cheerleaders have come out in recent months, describing all the perks Snyder gives his sponsors, like peaking in on a topless photo shoot in Costa Rica.

Again, Snyder isn't the only one to exploit cheerleaders.  The problem is endemic in the NFL and many past and present cheerleaders have come out with horrible stories in recent years.  However, Snyder somehow manages to personify all the worst instincts of the league in one man.  He is to the NFL what Donald Sterling was to the NBA before the basketball league finally forced him out in 2014 over a racist outburst.

If nothing else I would think Washington Redskin fans would have had enough of Snyder, given how badly the team has performed under his ownership.  This is one of the most loyal fan bases in the league, who go by the name Hogs, a soubriquet for the offensive line during the golden years of the team when they won three Super Bowls under Joe Gibbs.  Maybe they can just rename the team Hogs, or if they prefer Wild Boars?  Anything would be better than Redskins.
Posted by James Ferguson at 11:13 AM