The J is for Genius 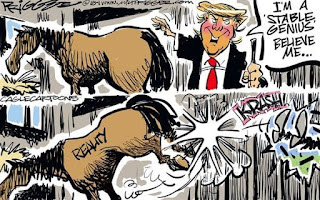 Time and time again we hear Trump profess how smart he is.  At one time he was ready to challenge Rex Tillerson to an IQ test when it was revealed the former Secretary of State had called Trump a fucking moron.  He may have topped that audacious challenge with his recent proclamation that he is too intelligent to believe in climate change.

Tillerson wasn't the only political ally or close adviser to call him an idiot.  The list is pretty long.  You might notice that all of these persons are now gone.  He doesn't take kindly to anyone questioning his intelligence.

We've come to understand that the White House doesn't like facts that counter its policy decisions.  You can call it the inconvenient truth or whatever you like, but the most recent report on climate change was released by the White House.  Trump, however, chose to openly refute it, as he did a previous CIA assessment that the Saudi Crown Prince was fully aware of what transpired at the Saudi embassy in Turkey.  Never have we had a White House that so regularly disputes its own findings.

When Bush wanted a favorable assessment of Iraq's WMD's in his build-up to his war with Iraq, he got the CIA to provide him one.  The report was disputed by the UN and other international agencies, but the WH and the CIA were on the same page.  Similarly, Bush formed an Energy Task Force to provide him with a favorable report to support his push for environmental deregulations that would allow the US to tap into more of its oil reserves, initiate fracking, and build more oil pipelines in environmentally-sensitive areas to counteract rising oil prices.

Trump seems to have no idea what is going on in the White House, and for that matter neither do his closest advisers, who were similarly blindsided by this 1600-page report, compiled by 13 federal agencies, which obviously took months if not years to prepare.  Most likely it had been commissioned by the previous administration and no one was smart enough to cancel it when Trump came into office.  Just like no one seems to have discovered the solar panels on the WH roof that Obama had reinstalled after Reagan had taken them down in the 80s.

Our brilliant president seems clueless about a great many things, yet he continues to promote his "natural instinct for science," his ability to see through CIA and military intelligence reports, as well as his general disdain for troublesome news that cuts into his television time.

The climate change report is a little more difficult to dismiss, but Trump is once again relying on American skepticism to back him.  He also has his talking heads at Fox and CNN doing their best to downgrade the report to that of paid scientists promoting worst-case scenarios that most likely will never happen.  Katherine Hayhoe, who co-authored the report, was "bumped" by CNN in favor of paid contributor Rick Santorum, who accused Hayhoe and other scientists of being paid to produce these "alarmist theories."  Trump, who recently called for a "government-run TV news network" appears to have his friends at Fox and CNN.

Trump is also unaware of PBS and VOA, both news agencies of the federal government.  In addition there is the American Forces Network.  For someone so intelligent, he seems oblivious to the range of news his own government provides.  Instead, he has turned Twitter into the Voice of the President.  I guess we can call it VOP for short.  The whole world is hinged or rather becomes unhinged on his every tweet.

We could dismiss this all as the madness of a preening president if it didn't have such dire consequences.  Climate change is real, just as the Crowned Prince was fully aware of the atrocious killing of Jamal Khashoggi.   Trump can deny the laws of gravity for that matter, but it doesn't make it any less real.  He will still fall flat on his face tripping over his own statements.

The key is not just to point out Trump's many false declarations but to quit allowing paid shills like Rick Santorum, David Urban, Andre Bauer and many others to echo these ridiculous statements on CNN and other mainstream news networks.  What's worse is that you have television syndicates like Sinclair Broadcast Group that own an inordinate share of local television stations and shove Boris Epshyteyn onto unsuspecting audiences in the form of "must-run" commentary. This forces us to have to recognize these absurd positions rather than gain a deeper understanding of how climate change is impacting our lives, and why we should be more concerned with what Saudi Arabia is doing.

One can argue, as Rachel Maddow often does, that Trump is fully aware of the game he is playing on the American public, but more likely we are dealing with a man in the deepest stage of dementia, no longer accountable for anything he says, recently comparing himself to Elvis.  This maybe why his lawyers are so afraid to have him directly confront Robert Mueller, preferring instead to answer the special counsel's questions for the president.

It will be interesting to see what a new Congress has to say about our "stable genius," as more and more information comes available in the coming months on a wide variety of his affairs.  Maybe reality will finally have a chance to kick Donald J. Trump in the ass?
Posted by James Ferguson at 12:51 PM