Say Goodbye to the Big Box 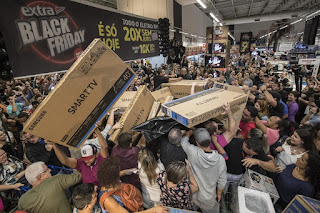 Fortunately, Black Friday isn't the stampede in Lithuania as it is in America.  You are relatively safe going to the shopping mall.  Never could figure out why so many persons go batshit crazy over this day other than it has become a rite of passage in America, imagining what it is like if actually this was the last run on the stores before the Apocalypse.

Many Eastern European countries actually had to go through this in the waning days of the Soviet Union when there were long lines for just about every product, as so few were available.  Even in the early days of independence, or restoration as they call it in Lithuania, supplies were limited, and persons tended to stock up on essential items.  There were long lines at gas stations because you didn't know if Russia would issue another oil blockade.  Even still there is fear that Russia could launch an attack at anytime given its oversized military base in Kaliningrad, which is sandwiched between Lithuania and Poland.  Hence the popularity of large supply outlets at discounted prices.

What makes Black Friday even more ridiculous is that all the online stores have Cyber Monday, pretty much negating all those great deals you thought you were getting at Target and Best Buy and whatever.  I suppose with so many of the big-box stores closing down there were some great stock clearances.  Sears, JC Penney, Kmart and even Macy's are closing a big number of their superstores around the country.  It is pretty much the end of an era as more and more people shop online.  Why wouldn't you when you can have all these items delivered to your doorstop or nearby package drop box, saving you the hassle of going to the mall.

Malls still try to find ways to lure you in with their huge cineplexes and crazy attractions.  The first mall in Vilnius was built around an indoor ice rink and is still quite popular.  Others offer carting, roof top dinosaurs and all kinds of special attractions like a 3D Van Gogh exhibit.  There are also food courts, featuring KFC and Pizza Hut, and fitness centers to keep the malls lively.  Kids still like to hang out in them.

I suppose it is the same in America.  The Mall of America, located in Minneapolis, Minnesota, even offers a one-stop Chapel of Love where you can fit yourself for a wedding and get married all in one outlet.  It seems people still love malls and superstores when they become events.

Nevertheless, we are increasingly moving toward a cyber economy.  What started as a trickle has now become a flood with many of the old big box stores struggling to keep up with amazon, which gobbles up 40% of the online sales in America.  The writing was on the wall when amazon pushed many of the big book stores out of business ten years ago.  Now the surviving big boxes fight to keep alive, including Walmart, the once invincible bastion of the big boxes.

If you live abroad like I do, you can get pretty much anything you want through amazon, and get some pretty good deals through amazon marketplace.  Scrutiny has finally been brought to bear on amazon for its low wages and undercutting prices, much the way Walmart continues to stifle its competitors.  Amazon is a trillion dollar company today, bigger than Walmart or any other former giant retailer.  Still, there is room for the small retailer, selling his or her goods through marketplace, with a nominal user fee.  Walmart crushed the small retailer with its superstores.  There was no way to compete with its "everyday low prices" at one time.

Some people still pine for the old days, angry that more and more stores now use automated check out stations and that you are hard pressed to find assistance in the vast warehouse spaces.  Mom and Pop stores are making a comeback by specializing in hard to find items.  This is especially true of  vinyl shops, eccentric bookstores, and shops that peddle the latest fashionable items like Fjallraven backpacks, which is probably already out of style if I'm aware of it.  I saw this in Budapest where specialty shops are thriving.  I imagine it is the same in America.

This has forced some of the big box stores to scale down and offer more cozy shopping environments.  After all, you can always have big warehouses or use logistic centers to store your items and ship them out on demand.  In many ways, this is throwback to the old catalog stores where you could order your item and wait a few days to get it.  Today, it is only a matter of hours, but then you can do the same thing online.  You can even literally flip through catalogs on Ikea and other websites.

Competition is tough.  Victoria's Secret is feeling the heat with so many rival lingerie companies now available with your favorite bras and panties from petite to plus sizes.  Buyers aren't so much interested in angels as they are fun undergarmets that capture their mood.  Take Happy Socks as an example.

The Big Store will soon be no more, except maybe in a few select locations where it can pull out all the stops and turn shopping into an experience, like it used to be in the good old days.  However, is the effort worth it?  It costs a lot of money to keep a giant flagship store like Macy's going, and the return on investment is making CEO's skittish.  That Thanksgiving Day parade doesn't come cheap.  Soon there will be no more social barriers to exploit.
Posted by James Ferguson at 2:07 PM