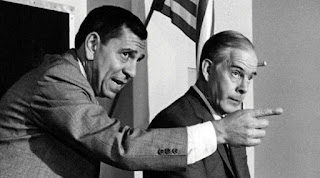 I love the term "fact-free."  It seems Republicans no longer have to prove anything they say is true.  It is enough to simply shout election fraud to the masses and their base believes it.  Not just Trump, but Rick Scott, Cory Gardner and a host of other Republicans.  If you wonder why Cory Gardner is so worried by what is going on in Arizona, he's up for re-election in 2020 and Colorado looks more liberal than ever.  Gardner may have the support of Jeff Bezos but that won't help much in a state that just elected the first openly gay governor in the United States.

It isn't voter fraud but Democratic backlash that is killing Republicans.  They may have been able to flip a few senate seats in deep red states, but out West the Blue Wave swept Nevada and Arizona.  These were states the Republicans were banking on to increase their majority in the Senate.  Trump prematurely claimed victory Tuesday night but the best the GOP can hope for now is plus-one if Rick Scott holds onto Florida.  They seem to have forgotten they lost a Senate seat last December in the Alabama special election.

At one time Gardner was considered a moderate voice in the Republican Party, but he like Paul Rand and Susan Collins have all gone over to the dark side.  Jeff Flake dropped out in Arizona only to see his seat go to the first openly bisexual woman senator in Congress.

Kyrsten Sinema is a bit of an enigma.  She once wore a tutu to protest the war in Iraq, which Martha McSally made sure everyone knew, only to win the US senate race by running to the center.  Her record in the House is actually to the right of center, having voted with Trump 63% of the time.  That would almost make her a Blue Dog Democrat.  However, when it comes to guns, abortion, health care and immigration, she is clearly to the left of center.  She has an F rating from the NRA.

One of the biggest losers this year was the NRA, which saw a score of its staunch gun activists in the House go down.  Hard line positions, which Republicans love to run on, no longer have clout among the electorate, especially in the wake of the mass shootings we saw take place immediately before and after the election.  Republicans also took a big hit on immigration, and the Kavanaugh vote was a virtual non-issue.

This has Western Republicans in a panic.  Arizonans hadn't voted for a Democratic senator since 1988.  John McCain's seat, which Jon Kyl currently occupies, will be contested in 2020 in another statewide election.  Gardner's seat in Colorado now looks very vulnerable, as does Steve Daines' seat in Montana, given that Democrat Jon Tester held onto his seat despite Trump campaigning heavily in Big Sky country. Even Utah saw a Democrat win a House seat, blemishing this once solid red state.   The last Republican western strongholds are in Wyoming and Idaho.

The big winner was health care.  States sent a clear message to Washington that Americans want comprehensive health insurance coverage, not the emergency room health care coverage Republicans endorse.  This means no more fucking around with Medicare, Medicaid and the Affordable Care Act.  Time to come up with a comprehensive health care package that allows Americans to enjoy the same coverage Congresspersons get.  Medicare for All became a very popular refrain in this election.  After all, we pay into it for all our adult lives, why shouldn't we enjoy it before we reach 65?

2020 could be a big year for Democrats if they don't drop the ball.  The Republican disinformation campaign finally appears to have caught up with them.  For the most part voters want elected officials who are accountable for the things they say.  This fact-free universe that Trump has tried to create isn't playing well beyond deep red states, and even in these states patience is wearing thin.  Look at Iowa, which voted two Republicans out of the House, leaving Steve King as the lone Aryan, I mean Republican, survivor from the carnage that took place in the Hawkeye State on Tuesday.  Even he barely held onto his seat, 50-47 per cent.

For two years, we have seen perhaps the greatest assault on the truth in American history.  It wasn't just Trump, who has probably lied more than all other presidents combined, but many, many Republicans who backed his outlandish claims and made many of their own.  Look at our dear senator from South Carolina, who said there would be "holy hell to pay" if Trump fired Sessions.  Now that the President has, Lindsey Graham has positioned himself to be the next Attorney General.

This kind of brazen duplicity is what Americans can't stand anymore.  The Democratic strategy appeared to be to keep a low profile and let the Republicans try to defend their allegiance to the United States of Trump.  It worked.  There was nothing wrong with Martha McSally.  She was considered a moderate Republican in Arizona, but her awkward attempts to defend Trump during the primaries eroded her base of support in the general election.  You can't have it both ways.  You either condemn Trump's pernicious lies or you get out of the way.

This is why the supposedly liberal Northeast re-elected three Republican governors, none of whom support Trump. Charlie Baker has kept his distance from the White House and become one of the most popular governors in the country, winning in a state that is considered the bastion of liberalism.  Kasich has done the same in Ohio, and the state elected a Republican as his successor.  Herein lies the blueprint for Republicans to save their party, if not by 2020, then certainly by 2024.  By then Trump will have become a bad memory.

The Democrats would have to put up a really bad candidate to lose the White House in 2020.  Trump won in 2016 largely as a result of the disdain for the Clintons.  His base was never that strong, and 2018 has proven it.  Republicans will lose somewhere between 35 to 43 seats in the House.  The biggest turnover since 2010, when they rode an exceedingly large red wave to victory.  It would have been much worse if there hadn't been so much gerrymandering since the last US census.  The disgruntlement in Trumpian politics is palatable.

Trump and his fellow Republicans can take some solace in that they retained the Senate, but you have to wonder if Western Republican senators will be so amenable to his policies when their own political future now appears in doubt.  Susan Collins saw Maine go Blue in a big way, which will affect her thinking these next two years if she plans to run for re-election.  Mitch will have a much harder time holding self-professed moderate Republican senators in line.

Who knows maybe Trump will swing Left in the second half of his tenure with his own political future on the line?  He's often switched course in mid-sentence, and if the only way for him to get a bill through Congress is to work with Democrats, it wouldn't be that surprising to hear him start singing praises for Nancy Pelosi.  After all, he proposed  $1.5 trillion for new infrastructure at the beginning of the year after suffering heavy defeats in Virginia and Alabama at the end of 2017.  Now's his chance to make good on that promise with Democrats controlling the House.  Wouldn't that be a hoot!

More likely Trump will dig in his heels, especially now that Democrats have threatened to ramp up investigations not only into his Russian ties but the way he handled the AT&T acquisition of Time Warner and prodding the US Postal Service to hike shipping rates for Amazon.  Then there's that pesky Robert Mueller hanging around.   This is going to very much be a White House on the defensive come January, 2019.