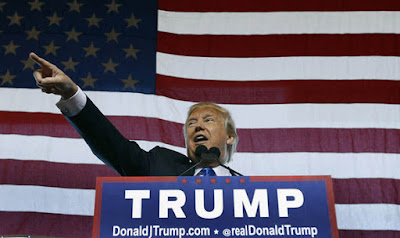 Once again Trump has turned the elections into a reality show -- this time Fear Factor.  He and the screaming banshees of Fox and right-wing radio and web channels have been pumping up the volume when it comes to the size, make-up and pending doom of the "caravan" creeping toward the American border at about 10 to 15 miles per day.  Trump doesn't miss an opportunity to scare his base into believing this imminent threat will bring unspeakable misery to America.  He's greatly inflated the numbers as well, turning thousands into millions in his latest barrage of tweets.

Beto O'Rourke made a mockery of this looming "invasion" by going to the border himself and holding a rally to show what an absurd notion it is that we are under attack.  Nevertheless, Trump has sent a contingent of troops to the border as a line of defense.  At one point, he loudly proclaimed that the military would take any provocation as a threat, including stone throwing, but has since been advised to tone down his rhetoric.  What's so amusing about this is that the "caravan/invasion" is still 800 miles away.  They would need ballistic missiles to reach the border at this point, which I'm surprised Fox guest panelists haven't suggested.

It is all so absurd, but when it comes to energizing your base it seems anything goes.  The gambit here is that Trump will scare enough Republicans into voting to offset the highly energized Democratic base, as Democratic candidates have presented Trump as the Demagogue-in-Chief.  You would think the Republicans would try to downplay this and make the Democrats look like the reactionaries, but Trump has fed right into the Democratic narrative with his bellicose rhetoric.  For once, it seems the Democrats have the upper hand.  They wanted to make the midterms about Trump and he gleefully obliged.

Trump is barnstorming the country with rallies in key red states.  Right now he is in Florida trying to drum up support for Ron DeSantis and Rick Scott, who are locked in tight battles in which they both trail.  Andrew Gillum has the chance to not only be the first Democratic governor in 20 years, but the first black Democratic governor ever of Florida.  Obama has likewise been in Florida promoting a man who looks like a mirror image of himself.

Obama took Florida in both 2008 and 2012 and Ben Nelson has been the Senator from the state for decades.  Trump barely beat Hillary in 2016, but it was enough to garner all its electoral votes.  Florida is considered a red state largely because Republicans have been able to hold onto the governor's mansion and state legislature for 20 years, but now that is in danger.

When you consider all the awful things that have happened in Florida during that time it isn't surprising that Floridians have had enough.  The state ranks near the bottom in health care, education and public welfare.  The algae blooms and red tide that has inundated the gulf coast is largely linked to the pesticides and other waste products flowing from the sugar operations in South Florida.  This foul and pestilent congregation of vapors has made its way up to the panhandle of the state, thanks to Hurricane Michael, and has left Choctawhatchee Bay a reeking mess of dead fish.  This is a direct result of the deregulation of environmental policies by successive Republican administrations.  For a state that relies heavily on tourism this is a major blow.

Rick Scott is being held mostly to blame for this mess, but Ron DeSantis would continue much of the same policies.  Scott is hoping to unseat Senator Ben Nelson, after serving what he believed to be two successful terms as governor, but his poll numbers continue to sag despite the millions of dollars being invested in his campaign, largely dark money.  DeSantis seemed a shoe-in for governor over a relatively unknown Tallahassee mayor, but his white supremacist past has caught up to him and he too finds himself trailing in the polls. Both statewide polls are within the margin of error so the election could break either way.

Back in Texas, Ted Cruz had been enjoying a fairly comfortable lead through most of the campaign, but now the race has tightened up and some polls suggest Beto may actually be ahead among likely voters.  This is largely due to Beto having greatly energized the Democratic base in the state, which may spill over to other Democratic candidates on the ballot.  He has literally covered the entire state thanks to a grass roots campaign that generated millions of dollars and drawn international attention.  Ted has had to rely largely on conservative Super PACs and Donald Trump.

The immigration scare plays better in Texas, so Trump has opted for a different tactic in Florida.  He portrays Gillum as a social liberal, or "libtard" as Magaheads like to say.  Trump has called out Gillum as an awful mayor who will drag Florida into the gutter as governor.  Crime has been the principal motivator here, with Trump and DeSantis claiming the crime rate has gone up in Tallahassee under Gillum's leadership.  Crime has actually gone down the past two years of the mayor's tenure, but it doesn't help Gillum's case that so many police unions are supporting DeSantis.

This is as bad as Trump trying to conflate the case of Luis Bracamontes with the fake immigration crisis.  You can call it Willie Horton 3.0, this time using Gillum as the face of crime in the state's capital, which is every bit as racist as the metaphors DeSantis has used to describe Gillum.

It remains to be seen if all this fearmongering works.  One would think the Republicans would be pointing to all the record economic numbers and taking credit for it, instead they are focused on making the Democrats look like a party of notorious immigration-sympathizers hell bent on taking over the country and opening up the border to the South to allow all these unsavory Guatemalans, Hondurans, and "unknown Middle Easterners" lurking in the caravan.  It's like the last desperate gesture of a political party trying to turn back what is largely seen as a blue wave sweeping the country.

An unprecedented amount of Republican House seats are seen in danger, whereas only 3 Democratic House seats are seen as vulnerable.  Nate Silver at 538 said that nearly every toss-up election would have to break the Republicans' way to retain the House, and gave the odds of that happening at 1000 to 1.  Not exactly the team you want to pick.  But, who knows, maybe Trump has seized on the winning Powerball numbers, hoping fear will tip voters when everything else appears to have failed.