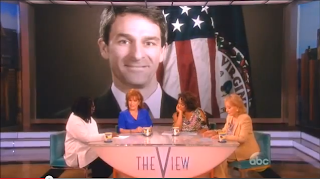 The Virginia governor's race has gotten nasty, very nasty, with Ken Cuccinelli putting all his eggs in the Tea Party basket, hoping that it will energize the base of the Republican Party to carry him past Terry McAuliffe, the former Democratic party chairman.  McAuliffe has built a sizable lead in the month leading up to the Nov. 5 election, which has led to desperate measures on Cuccinelli's part.

The current state attorney general is a Tea Party favorite, but like other Republican candidates the past year had tried to move more to the center of the party.  However, that didn't seem to work and now he is calling in Rick Santorum and other arch social conservatives to mobilize the rural base of the GOP in hopes of offsetting the strong appeal McAuliffe has in the Washington DC metro area of Virginia.

The state appears more divided than ever.  This is a state that previously split in the build-up to the civil war, with West Virginia becoming a new state in the Union.  Now, we see the "cultural war" being played out like in so many other parts of country - rural vs. urban areas.  The problem for Cuccinelli is that the state has become increasingly urban and swung for Obama in each of the last two national elections, leaving pundits to ponder if this could be the end of the Tea Party in swing states.

Making things worse for Cuccinelli is that his own party appears to be vacillating on him, anxious to move beyond these cultural divisive issues and embrace the political center, especially in the wake of the Tea Party-engineered government shutdown.  What had been a safe district for Republicans in Florida went Democratic in a recent House special election, adding new fears that the Tea Party message no longer works.

Even worse is the huge gender gap emerging, with Cuccinelli trailing among women voters by 25 per cent, largely because of his zero tolerance approach to abortion and highly dubious Crimes Against Nature law he reinstated as attorney general.  But, it seems some persons simply can't see the writing on the wall and choose to live in some rural fantasy of America.
Posted by James Ferguson at 9:14 AM