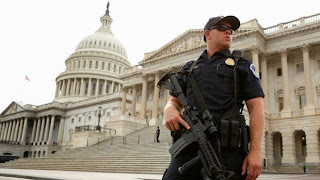 Day 3 of the government shutdown is capped with a shootout on Capitol Hill, as a woman in a black sedan ran into the bollards in front of the Capitol after a chase down Pennsylvania Avenue.  Apparently, she had first tried to storm the gate at the White House.  The woman had a one-year old child in the car with her.

Of course, one can only speculate (which the news media so much likes to do these days) that maybe her reason was that WIC had been stopped due to the shutdown. The identified woman, Miriam Carey, seems to have been unemployed and suffering from post-partum depression.  The story has been run all over the world, and is symbolic of the effects the shutdown is having on a great number of Americans, while Fox pundits call the shutdown no big deal.

This Fox op-ed piece calls it a "slimdown," even though the shutdown is costing Americans an estimated additional $12.5 million per hour, since the spending bill will eventually be passed.  Of course, there have been grandstanders in front of the WWII monument bemoaning the shutdown, as if this is a great display of their patriotism in the face of their manufactured crisis.

President Obama has laid the blame squarely at House Speaker Boehner's feet, saying he has the power to call a vote at any time on the returned Senate bill, but is refusing to do so.  Boehner, it seems, has caved in completely to the Tea Party Caucus, despite widespread anxiety in the GOP.   At least 20 House Republicans are willing to vote for the spending bill without any cuts or delays, which would probably be enough to carry the measure.

The Tea Party, however, seems content with the shutdown, having brought government to its knees.  TP caucus members seem to think they have the will of the people behind them, when polls show only 22% of Americans favored the shutdown.

The Tyranny of the Minority raises its ugly head again, in the form of a rattlesnake, which the Tea Party has adopted as its official mascot. They took the Gadsden Flag of 1775 as their emblematic banner, and Southern members have even imposed it on the Confederate flag, further signifying rebellion.

What we appear to have is a group of anarcho-fascists determined to overthrow government.  They've already done their best to challenge federal government at the state level, by enacting a number of anti-Federal measures, mostly over federal gun laws.  Obviously,  this is a group of people that doesn't swear by the Constitution, but would have been much more comfortable with the Articles of Confederation that preceded the Constitution, and vested authority largely in the states.

All we can do is wait and see what happens, but the frustration and anger is palpable as witnessed by this scene yesterday, which resulted in a lockdown of Congress until the woman was subdued.  Fortunately, for Congress the Capitol Hill Police still works despite the shutdown.
Posted by James Ferguson at 8:11 AM