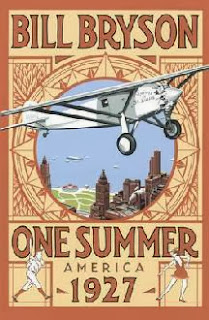 Bill Bryson has always been fun to read for his anecdotal observations but now he turns his lens on history, One Summer: America 1927, in particular.  According to this review in The Guardian, the style is pretty much the same, reveling in a cast of characters and events that range from Babe Ruth to the Sacco and Vanzetti trial, with about everything you can imagine in between.  He particularly revels in pop icons, calling out Zane Grey and Edgar Rice Burroughs, while treading lightly and erroneously on American expats like Fitzgerald and Hemingway.  Odd, given that Bryson himself was, and is again, an expat, now chancellor at Durham University.  But, I suppose he felt a little homesick for the American past and decided to gambol through the Roaring Twenties.
Posted by James Ferguson at 4:35 PM