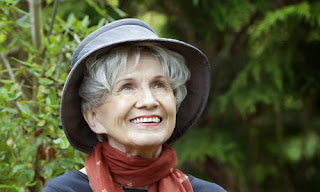 After what seemed a rather obscure set of Nobel prize winners, the award for literature comes close to home in being granted to Alice Munro.  James Wood, in The New Yorker, callls her "Our Chekhov" and says it is "deliriously incredible" that she should win the award after so many years.

Not so long she announced her retirement. Famous for her sets of short stories that read as organic wholes, Munro has developed a devoted following over the years. Not so long ago, she handpicked a selection of 17 stories for Everyman's Library entitled Carried Away.  Several collections have come out since, including Dear Life, which apparently was meant as her last words.

The rumor mill was rife, with many expecting either she or Philip Roth, who also recently announced his retirement, to nab the award this year.  Munro is a bit of a surprise because she seemed to disdain politics, which the Nobel committee generally gravitates toward.  This year, the Nobel committee gave the award for art's sake, calling her "the master of contemporary short fiction."