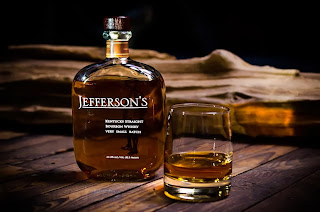 Some enterprising whiskey maker has tried to cash in on Jefferson's name, if not his legacy.  From most accounts, Thomas Jefferson was a wine drinker, not a whiskey drinker.   He had a particular fondness for Madiera.  Fortified wine traveled better than typical fermented wine.  He also liked Sherry and Italian sparkling wines like Nebbiolo.  The good folks of Monticello took the time to compile a list of his journey entries on the subject.

So, why bourbon?  The first distillery was recorded in Virginia in 1783, although home batches were probably being distilled long before.  This was before Kentucky statehood in 1792, as these sour mash whiskeys have long been associated with Kentucky and Tennessee.  I suppose one could argue that Jefferson probably had a taste of this quintessential American drink, but apparently never recorded his impressions.

Whiskey was indeed popular throughout the country, which is why Hamilton's tax on distilled spirits wasn't very well received, resulting in the Whiskey Rebellion of 1794.  The rebellion was quelled, but ongoing battles between distillers and revenuers have persisted throughout the decades and have become the stuff of legend.

Bourbons have matured over the years, and have become the favorites of presidents.  Old Crow was apparently the favorite drink of U.S. Grant.  Lincoln purportedly sent him and his staff a barrel after a key victory in the Civil War.  Bill Clinton was partial to Maker's Mark.  But, it is small batch bourbons like Jefferson's Bourbon that is really making a mark these days.  It has garnered rave reviews, although its Presidential Select 21 year will set you back $120.