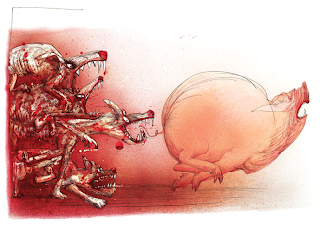 There is something Orwellian about the situation in Congress.  Boehner and his fellow GOP leaders no longer seem able to control their mad dogs, as they chomp at everything in sight.  As I noted before, the House Tea Party caucus only numbers 47 persons, yet because of it "ideological purity" has apparently intimidated the GOP.  This was their chance to rein in their dogs, but instead the Teabaggers are running wild, pulling the party in all sorts of directions it doesn't want to go.

I'm reminded of "Animal Farm," where the pigs used the dogs to keep all the other farm animals in line. In this case the pigs are the conservative corporate interests which are using the Tea Party to keep the GOP in line.  Odd, considering the Tea Party was supposed to be a "grass roots" movement with no leaders and advocated a decentralized government.  Hmmm, wasn't that what Communism was originally about?

One can almost imagine Ron Paul as "Snowball," the Trotskyite in the movement, whose books originally inspired the more Libertarian-minded Tea Partiers.  But, the movement was very quickly hijacked by the "Birthers," who bombarded the media with their assault on Obama's legitimacy as President.  In their addled minds, Obama is Farmer Jones.

The Tea Party took the 2010 midterm Republican turnover in the House as a mandate and have been driving their anti-Obama agenda ever since.  Ron Paul didn't stick around, leaving it up to his son (who won a Senate seat from Kentucky) to carry his mantle, while he devotes himself to television with his own channel.  However, his message is lost in the din the Tea Party has created in Congress.

2012 didn't prove to be the big year the Tea Party imagined.  They failed to take over the GOP, finding themselves with a very objectionable Mitt Romney as nominee, who ultimately lost to Obama.  They also lost seats in the House and their only major victory was Ted Cruz winning a virtually uncontested Senate seat from Texas.  They had to make due with what they had, and Ted has gladly taken the bone and run with it, mounting an epic faux filibister in the Senate over the spending bill.

Boehner, McConnell and the rest of the GOP hierarchy have scrambled to maintain hold of the party, finding themselves making dreaded concessions to the Farmers (Democrats) while still holding a defiant position to appease the Tea Party.  But, more and more, it seems the Tea Party dogs no longer see themselves as part of the GOP, but a third force with a fierce bite, determined to dismantle government, and in particular "Obamacare," anyway they can.
Posted by James Ferguson at 1:18 PM